Heavy metal icons Iron Maiden have released a video for their song “Death Or Glory” live from The Book Of Souls World Tour. 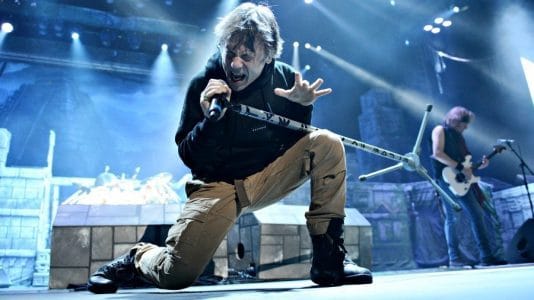 Sleaze Roxx stated the following about the song “Death Or Glory” in its review of Iron Maiden‘s latest studio album The Book Of Souls: “Nods to the past return with “Death Or Glory”, a song I can already imagine being played live to the sing-along of thousands of fans and probably the most old school in the entire album.”

Sleaze Roxx stated the following in its review of Iron Maiden‘s The Book Of Souls World Tour stop in Toronto, Ontario, Canada a few months ago: “I like all the songs on The Book Of Souls but they just don’t compare to the Maiden tunes from the ’80s and ’90s that I have grown up listening to over all those years. After the customary UFO track “Doctor Doctor” blared through the PA system, Iron Maiden opened the show with the track “If Eternity Should Fail” from The Book Of Souls. A myriad of feelings came over me when the iconic heavy metal giants started with that song since I had the excitement and euphoria of finally seeing Maiden live again after an almost four year absence counterbalanced by having to listen to a song that I honestly did not really like that much. Luckily for me, the rest of the songs played from The Book Of Souls were surprisingly quite enjoyable with “Tears Of The Clown” and “The Red And The Black” really standing out.”