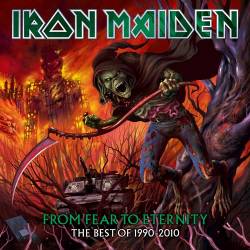 EMI are proud to announce the release of ‘From Fear To Eternity: The Best Of 1990-2010’ on May 23rd (May 24th in the USA). A double-CD set spanning twenty years, this follows the huge success of 2010’s studio album ‘The Final Frontier’ which hit the number one spot in 28 countries around the world. It also became the band’s highest-charting album in the USA where Iron Maiden have just been awarded their first Grammy for Best Metal Performance, for the song ‘El Dorado’, taken from ‘The Final Frontier’ album, and which is included in this selection.

Iron Maiden’s current phenomenal global success has seen the band not only scale new-found heights aided by their unique method of touring, using a customized Boeing 757 – named Ed Force One by their fans – to transport band, crew and all their equipment round the world to many new places, but has meant their ever-expanding fanbase now encompasses a brand new generation of metal lovers. ‘From Fear To Eternity’ is a chance for these new fans of the band to explore Iron Maiden’s rich history, with the highlights of their last eight studio albums distilled into this handy collection, which follows 2009’s compilation of their earlier work, the 1980-1990 ‘Somewhere Back In Time’ album.

Perennial favourites to be found on this album include songs also featured in Maiden’s current ‘The Final Frontier World Tour’ set list; tracks such as ‘Fear Of The Dark’, ‘The Wicker Man’, ‘Blood Brothers’ and ‘Dance Of Death’ sit alongside recent classics ‘El Dorado’ and the hauntingly evocative ‘When The Wild Wind Blows’. It also include singles like ‘Holy Smoke’ and ‘Be Quick Or Be Dead’ together with more progressive thought-provoking album tracks like ‘Afraid To Shoot Strangers’ and ‘For The Greater Good Of God’. This new collection charts the musical development of Britain’s most successful metal band as they have evolved their sound, producing longer, more complex songs, gaining huge critical acclaim in the process. Featuring many of the epics for which the band has become renowned, it is accordingly released as a double-CD, but will retail for the price of a single album.

The full tracklisting for the CD album is as follows:

Iron Maiden’s 2011 The Final Frontier Tour is currently underway in an Around The World In 66 Days odyssey aboard Ed Force One, piloted by lead singer and qualified airline captain Bruce Dickinson. Having recently completed a series of shows in Australia and first-ever visits to Singapore, Indonesia and South Korea, they are now on their way to Mexico for concerts in Monterrey and Mexico City. After this they will play shows right across South America, including Argentina and Chile where both shows will be filmed for inclusion in a DVD to be released later this year.

Says bassist and founder member Steve Harris, “The tour has been amazing so far and we’ve been overwhelmed by the reaction from our fans everywhere. We are now on our way to Mexico and South America which the whole band is very excited about! We really enjoy playing there as the fans are so passionate and we always feel a huge responsibility to put on the best show we possibly can for them. For this tour we have a great set list, a brand new stage show, and of course Eddie!. This leg of the tour ends with two shows in Florida in April, which is another favourite place for us to play, then we’ll be taking a short break before a series of Summer headline Festival and Stadium shows in Europe, finishing up with our first UK Arena tour in many years. It’s a great way to round off what has been an incredible time for Maiden these last few years. We are really looking forward to seeing all our loyal fans again and welcoming all the new ones!”