Iron Maiden singer Bruce Dickinson to release memoir ‘What Does This Button Do?’ 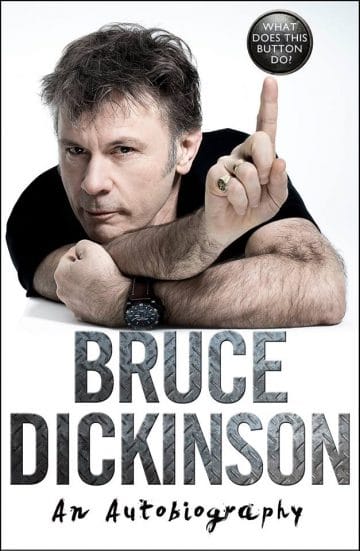 Bruce Dickinson, the long-time lead vocalist for heavy metal giants Iron Maiden, will be releasing his autobiography titled What Does This Button Do? on October 19, 2017.

“What Does This Button Do?” – Bruce Dickinson‘s memoirs to be published Oct 19th!

For the first time ever, Bruce shares his recollections of childhood and school days, joining Maiden, his solo career, aviation, his recent tongue cancer and much more. In typical Bruce style, this book was written exhaustively in longhand, filling seven A4 notebooks, which he has been working on meticulously whilst out on the road during The Book Of Souls World Tour!

The book will be released internationally with local language versions being made available too.

Sleaze Roxx recently attended Iron Maiden‘s The Book Of Souls World Tour during its tour stop in St. Paul, Minnesota, USA on June 16, 2017 and stated in its concert review: “Once “Doctor, Doctor” was done playing on the house speakers, the lights went out and a video began to play on the big screens on each side of the stage. The video was captivating and I started thinking to myself how cool this would be if it was a video game. When the video ended, Dickinson was on one of the risers towards the back of stage singing the beginning lines to “If Eternity Should Fail.” As soon as the music kicked in, it was a non-stop adrenaline fueled concert for the next two hours. If I didn’t know better, I would have sworn Dickinson was only 20 years old. He was running all across the stage, all the while sounding stronger than ever on vocals. I literally stood there in awe at how amazing they sounded and how well they commanded the stage.”