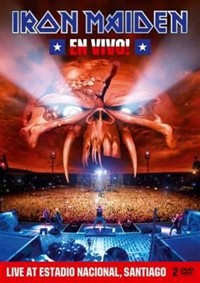 ‘En Vivo!’ was filmed on April 10, 2011, in front of over 50,000 ecstatic fans at the Estadio Nacional, Santiago, during the Round The World In 66 Days leg of The Final Frontier World Tour, and captures a magnificent performance by the band, ardently embraced by the legendary Latino passion and energy of their Chilean fans. With spectacular stage backdrops, dynamic musicianship and a literally jaw-dropping appearance by Eddie, this live show encapsulates to perfection the heart and soul of Iron Maiden 2011.

Bass player and founding member Steve Harris comments, “For The Final Frontier Tour, it was really important to me that we filmed in South America as we’re always so overwhelmed by the fans’ reaction when we go to that part of the world and I wanted to reflect that in the filming. After much consideration, we chose the Santiago show as we felt it was one of our best performances of the entire tour and to play at the prestigious Estadio Nacional was a landmark moment for us. For reasons known to our fans, it took a long time before we got to play our first show in Chile, and once we did get to play a show, the response was so phenomenal we just had to keep coming back, and it’s got better and better each time!”

The concert was filmed digitally using 22 HD cameras and an octocam (a flying camera which captures aerial crowd scenes), recorded in both stereo and 5.1 audio and mixed byIron Maiden’s longstanding producer, Kevin “Caveman” Shirley, all of which serves to accentuate the incredible atmosphere of this compelling performance. Extensive use is made of split screens so fans can follow the individual members more closely, and the set list moves seamlessly between songs from Iron Maiden’s most recent studio album, 2010’s ‘The Final Frontier’, through to classic fan favorites via the band’s vast and varied catalogue.

Disc two of the DVD set is a bonus disc containing an 88-minute documentary, ‘Behind The Beast’. This is also an entirely in-house production by Iron Maiden’s own Krew, led by Andy Matthews, and is intended as an interesting and revealing high quality “home movie” for their fans to see how Iron Maiden put on a tour and what goes on behind the scenes at a show. It describes the extraordinary story of one of the most acclaimed and ambitious touring shows in the world. It illustrates the day-to-day life and complex tasks of the Maiden Killer Krew and the other characters behind the scenes. The expertise and experience, the problem-solving and successes, the sheer scale and immense difficulties of the undertaking come to life through the day-to-day coverage of the tour and the background work of the crews in sound, lighting, carpentry, production and set design. As well as interviews with the Iron Maiden crew, it interweaves anecdotes from the band and their fans, and includes footage of the live show in this comprehensive guide to the intricacies of staging massive, live stadium shows around the world out of the belly of a Boeing 757.

The bonus disc also contains an extended version of the promo video “Satellite 15… The Final Frontier,” a video about the making of “Satellite 15… The Final Frontier” plus the opening video sequence to The Final Frontier World Tour.In addition to the Blu-ray, the 2-DVD set will initially be available as a Limited Edition double DVD in a Collectors’ Steel Book Case and Double Vinyl Picture Disc. As well as a traditional 2-CD soundtrack album, ‘En Vibo!’ will also be available as a digital download audio album and digital download video.