Iron Maiden‘s frontman Bruce Dickinson called out a fan at the Adelaide Entertainment Centre in Adelaide, Australia concert on May 12, 2016 towards the end of the iconic heavy metal band’s classic song “Fear Of The Dark.” 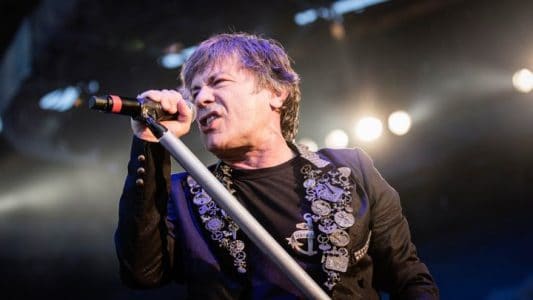 Dickinson can be heard (start at the 6:57 minute mark in the video below) saying: “To the gentleman in the front with the Raiders shirt on. Yeah, you, yeah, you, being restrained by a couple of very friendly fans. Just fucking calm down, all right, will ya? Otherwise… Yeah, you. Otherwise you will be exiting. Pick a window. I hope you like hospital food. You, yeah. Give me the fucking finger, mate. You fucking come backstage and I’ll fucking sort you out myself. Cunt!”

Sleaze Roxx stated in its concert review of Iron Maiden‘s show in Toronto, Ontario, Canada on April 3, 2016: “The star of the show though was singer Bruce Dickinson who showed no signs of any lingering issues from his tongue cancer issues from a while back. Dickinson was also entertaining while showing an interest with what is going on in the world with some of his stories to introduce certain songs. For instance, prior to “Blood Brothers”, he explained that Iron Maiden had just played in El Salvador which was in a sad state due to two major gangs trying to kill each other off leaving many casualties along the way. Dickinson went on to state that Iron Maiden do not care where you’re from and bring people together, or something like that, since apparently no one was killed during Maiden‘s stay in El Salvador.”

Watch this awesome performance from Iron Maiden Adelaide 12/05 /2016 at the Adelaide Entertainment Centre. Bruce Dickinson gets heated with a rowdy fan at th…