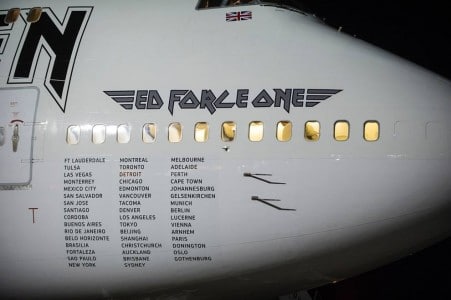 Iron Maiden, who are about to embark on their The Book of Souls World Tour, have a new Boeing 747 “tour bus.”  Known as Ed Force One and carrying over 250 people, the plane will be piloted by lead singer Bruce Dickinson himself, and will go around the world with the band in 2016. The Book Of Souls World Tour will commence at the BB&T Center in Fort Lauderdale, Florida, USA on February 24, 2016 and the opening acts will be Anthrax and The Raven Age.

The following message was posted on Iron Maiden‘s Facebook page a few days ago (with slight edits):

“…Ed Force One, our new 747 Jumbo, is all decaled or branded-up ready to go and Bruce has his shiny new 747 type rating so he can fly the plane. Ed Force One flies into the UK on Wednesday evening and IronMaiden.com will be at Cardiff Airport, stepladder and phone in hand, to bring you the first footage live on Periscope! Keep an eye on the website or our social media channels for details – we’re @ironmaiden on Facebook, Twitter and Instagram.

As we initially announced we’ll be using Ed Force One right around the world as usual but also including the first few shows in Europe this time, making this the first time EF1 has visited Europe on tour! However after the Swedish show at Gothenburg Ullvei Stadium on June 17, we’ll be reverting to our traditional truck & bus touring methods as logistically this makes much more sense considering the lesser distances involved and airport parameters.

Just to remind you, although many of the shows are already sold out, particularly in North America , there are always likely to be some production-hold tickets released to the public closer to show day. So if you do find a venue is sold out it’s always worth checking with them again, probably from around 3 days in advance of any show, right up to show day itself, in case these held tickets are being released for sale…” 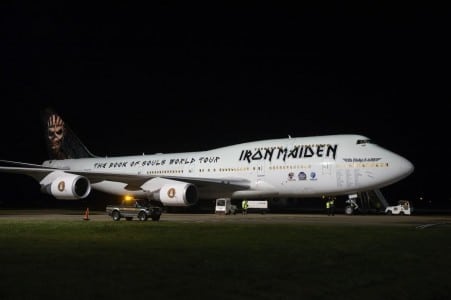 Interestingly, back in 2008, the Canadian filmmaker Sam Dunn followed Flight 666 around the world on Iron Maiden‘s Somewhere Back in Time World Tour.

Sleaze Roxx stated the following in its review of The Book Of Souls: “Iron Maiden — What more can be said about this band that hasn’t been said before? For some unknown reason, this is the band that brings together just about every hard rocker and metal head, no matter their personal preferences. It’s of no importance if you’re a fan of sleaze, speed, thrash, death, or any other sub-genre, for when Iron Maiden is discussed, common ground can almost always be found.

Opinions regarding their previous three efforts, Dance Of Death, A Matter Of Life And Death and The Final Frontier have been divisive. A fact that likely didn’t help with fan expectations when Iron Maiden announced a double record with three tracks clocking at over 10 minutes, not to mention the uncertainty brought by vocalist Bruce Dickinson’s recent tongue-cancer survival. What then, does this veteran band offer with its sixteenth studio release? Simply put, a 92 minute extravaganza that constitutes their best album, alongside with the universally loved Brave New World, from Dickinson’s second era with the band.”