Is AC/DC’s Angus Young not willing to wait for Brian Johnson?

Cantonrep.com has reported that AC/DC frontman Brian Johnson was visited by his friend and comedian Jim Breuer. During the visit, Johnson revealed to Breuer how AC/DC handled the news from Johnson that he might not be able to tour.

The article from Cantonrep.com posted in the early morning of March 15, 2016 states in part:

“AC/DC singer Brian Johnson was “kicked to the curb” according to Johnson’s friend and comedian Jim Breuer, after the 67-year-old frontman informed band co-founder Angus Young of his hearing condition. 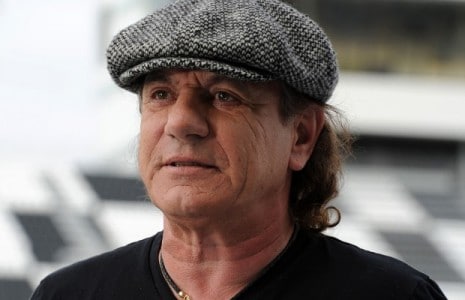 Breuer informed listeners of AC/DC’s situation via his podcast, “The Metal In Me,” after recently spending time with Johnson following his March 11 show at Sarasota Florida’s McCurdy’s Comedy Theatre.

“(Brian) said that he called and let (AC/DC and Young) know, ‘Hey this is what the doctor said, but let’s try to figure this out. I don’t think it’s as bad as he said it is.’ Literally the next day in the press, it was ‘Brian Johnson, tour canceled, he’s losing his hearing.’ ”

…According to Breuer, Johnson was optimistic about making up the dates on the band’s current U.S. tour and finishing as many remaining dates on the AC/DC itinerary as possible. Then his tour luggage showed up on his driveway.

“(Brian said) ‘I would really like to finish and do some shows. I think we can knock this out.’ ” Breuer continued. “Then all his luggage that he toured with showed up at his driveway. There’s been no calls. No, ‘How’s your hearing? How’s your health?’ Boom. Here’s your (stuff), nice to know you.”

According to the band’s website, Johnson was “advised by doctors to stop touring immediately or risk total hearing loss.” The press release went on to state the remaining 10 U.S. dates of the band’s current “Rock or Bust” tour would be rescheduled later in the year and “likely with a guest vocalist.”

…Breuer explained that Johnson’s doctor informed the singer that he had lost a percentage of his hearing during the first run of the “Rock or Bust” tour during “open air” stadium shows, and it raised a “red flag” for the band’s eldest statesman.

“(The doctor said) ’Now you’re gonna go out and do indoor (shows)? I do not put my name on this. You’re a grown man. You make a decision, but I would not mess around with this at all,’ ” Breuer explained of the doctor’s diagnosis.

Johnson, who recently flew to London to attend the funeral of a close friend while on the road with the band, called AC/DC management and later spoke to Young to explain the situation.”

Back on March 7th, AC/DC posted the following message (in part) on its website: “AC/DC are forced to reschedule the 10 upcoming dates on the U.S. leg of their “Rock or Bust” World Tour. AC/DC’s lead singer, Brian Johnson, has been advised by doctors to stop touring immediately or risk total hearing loss. Tomorrow’s show in Atlanta through Madison Square Garden in New York, NY in early April will be made up later in the year, likely with a guest vocalist. More information regarding these rescheduled shows to come. Current ticket holders can hold on to their tickets for the rescheduled dates or receive a refund at point of purchase.”