Is John Corabi’s decision not to talk about Mötley Crüe members due to Sleaze Roxx? 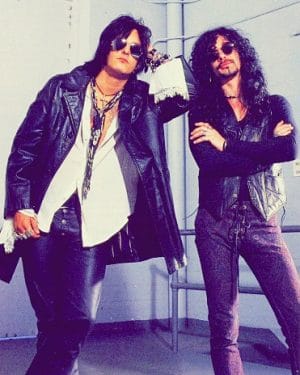 “OMG!!!!!! I officially have NOTHING to say about any member of Motley Crue ever again!!!! I was asked a question a few days ago about why Nikki dogged the Motley record, and I said I have no idea why…blah, blah, blah…This isn’t news kids!!!! I don’t really care. Never did, never will!!!! Motley has retired. Motley IS, NIKKI,TOMMY,MICK, and VINCE!!!!!! And its been that way since 1997, as it should be…I’m not backing this BULLSHIT stirring that is happening to start a feud…It ain’t going to happen here…If you want to know about The CRUE, ask the CRUE!!!!!
Peace,
Crabby“

Ruben Mosqueda had the honour of behalf of Sleaze Roxx to interview Corabi once again a few days ago after first interviewing him in 2012. This time around, the Sleaze Roxx interview was heavily focused on The Dead Daisies with two almost reader friendly obligatory questions at the end touching on Corabi‘s former Mötley Crüe bandmates. Corabi was asked about Nikki Sixx changing his position from positive to negative when it came to the Mötley Crüe ’94 album and whether Corabi thought Sixx really felt that way about the album or whether he was simply doing it to stir up some controversy.

Corabi‘s reply to the question was as follows: “For the life of me, I have no idea. It’s funny, I was hanging out with Vince. We did a festival together called ‘Farm Rock’ and we were talking. I was like “Vince, what the fuck is up Nikki’s ass right now? 22 years later, he decides that it’s a ‘very unfocused record’, there’s no choruses and John Corabi couldn’t write and he had to do everything?! Where does that come from Vince?!” He laughed. I think he wanted to say something but he came back with “Dude, you know Nikki. Whatever, fuck it!” If my phone didn’t start blowing up with calls and texts regarding that comment, I would have never known it. I am so far removed from that record. Let me be clear. I love that record. I’m very proud of that record. I’m good with Tommy [Lee]. I’m good with Mick [Mars] and I’m good with Vince [Neil]. I have no idea why Nikki feels that I’m the biggest piece of shit to roam the earth?” Perhaps not that surprisingly, the Sleaze Roxx interview and in particular Corabi‘s last statement started making headlines and were mentioned by a few other bigger online publications such as Blabbermouth, Loudwire and Eddie Trunk.

Loudwire also posted about Corabi‘s comments that he would not talk about Mötley Crüe band members anymore and singled out the Sleaze Roxx interview as the culprit when it stated:

“Motley Crue have always been a lightning rod for controversy in addition to their notorious debauchery. The dysfunction between members was best chronicled in The Dirt autobiography, including the John Corabi era that saw the release of their self-titled 1994 album. Bassist Nikki Sixx recently slagged the record, drawing a non-response from Corabi initially, followed by the singer pondering, “I have no idea why Nikki feels that I’m the biggest piece of s–t to roam the earth?” After seeing the media coverage of his quotes, Corabi’s ready to move on.

There has been a rise in artists harshly reacting to quotes pulled from interviews and Corabi now falls into this camp. After seeing the quote above make headlines around the rock and metal circles from his interview with Sleaze Roxx, the singer expressed his disdain that it made the news with a post on his Facebook page (seen below). Swearing off talking about Motley Crue for good, Corabi said in part, “I don’t really care. Never did, never will!!!!” about Sixx’s opinion on Motley Crue.”