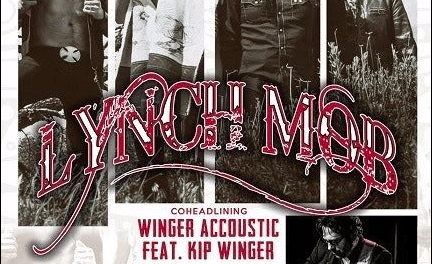 Is singer Oni Logan back in Lynch Mob?

That is indeed the question with a poster advertising a co-headlining gig with Lynch Mob and Winger (the latter doing an acoustic gig) at Herman’s Hideaway in Denver, Colorado, USA on October 5, 2019 showing the Lynch Mob line-up that played on The Brotherhood album that was released in 2017. 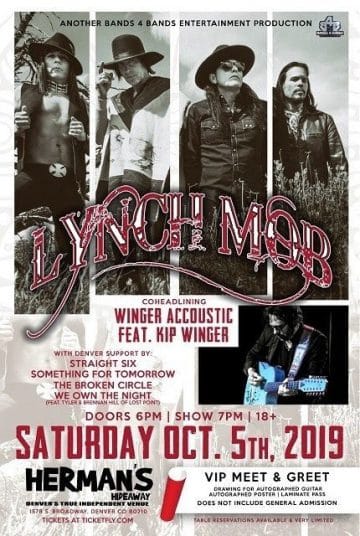 Logan left Lynch Mob in early January 2018 and was replaced by Warrant singer Robert Mason on a handful of gigs and by Blonz lead vocalist Nathan Utz at other shows.

Wikipedia states the following about Logan‘s tenure in Lynch Mob over the years (with slight edits):

“… A year after, he was courted by George Lynch, who had recently left the band Dokken with drummer Mick Brown to form the band Lynch Mob.

In 1990, Lynch Mob released their first album Wicked Sensation, which featured Logan on lead vocals. However, shortly after finishing touring, Logan and band decided to part ways. His replacement was a new singer by the name of Robert Mason. Why Logan and the band parted ways is still unknown to the public.

Upon leaving the Lynch Mob, there was a deal waiting for Logan with Atlantic Records. Logan formed the band Violets Demise with former Dio guitarist Rowan Robertson, a young 21-year-old Scot Coogan, and well-known bassist Spencer Campbell. The group recorded their first album with the renowned producer Dave Jerden, but it never saw the light of day because of changed personnel in the record company. Recently, the unreleased Violets Demise album began circulating on the Internet and has since become a popular bootleg. In 2001, album was self-released under the name Logan/Robertson, titled Revisited.

…. Logan reunited for a tour with Lynch Mob in 2008, and appears on the band’s 2009 Smoke And Mirrors album. According to an interview with George Lynch, the record is “the natural evolution of where ‘Wicked Sensation‘ would have went [sic] with Oni had we done a second record.” Logan was set to sing on the 2010 Lynch Mob tour, but reportedly two hours before Lynch Mob were set to hit the road, there was a discrepancy regarding money. Chas West replaced Logan on the tour.

Logan re-joined Lynch Mob in early 2012 and was the co-songwriter and vocalist on the 2012 Sound Mountain Sessions EP. He also toured with Lynch Mob promoting the EP in the summer of 2012. In 2014, Logan partnered with George Lynch again to record an EP titled Sun Red Sun, which was released in October 2014. Logan and Lynch subsequently signed a recording contract with Frontiers Records, releasing two more full-length albums as Lynch Mob, Rebel (2015) and The Brotherhood (2017). Logan departed the band once again in early 2018 announcing that he would be putting together a new recording and touring project.”