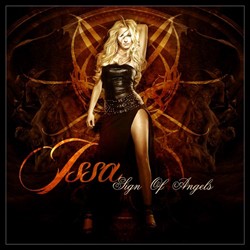 Frontiers Records is excited to present the world the talents of Norwegian singer ISSA (Isabell Oversveen) with the release of her debut album “Sign of Angels” on September 14th in Europe and October 10th in the USA.

Sometimes real discoveries in music shake up the rock world from out of nowhere. In 2008 a new band from Sweden called Work of Art took the Melodic Rock scene by storm with a stunning debut album. In the end of 2009 W.E.T., another alliance between Swedish musicians with singer Jeff Scott Soto was met with the highest enthusiasm from the Melodic Rock crowd, and just a few months ago, the return of Treat with “Coup De Grace”, marked another milestone release in the genre. Now, once again from Scandinavia, Issa, an exceptionally gifted singer from Norway takes her chance with “Sign of Angels”, her debut album, an album that many of the ones “in the know” have defined as a “bomb”!

A video clip for the song “I’m Alive” — a true radio hit — was shot by Thomas Tjader (Pretty Maids, In Flames) and will be added to the album.

Issa is a 26 years old girl from Oslo. At 17 she started to work her way into the music business as a demo singer for different labels in studios all around Norway. At 19 she won a competition with almost 150.000 votes singing the song “Fade Away” written by Stian Aarstad, who had been a member of Dimmu Borgir. The song was released on a record in co-operation with TV channel Fox Kids.

People just love listening to this girl sing and she soon hooked up with Gaute Ormaasen from the Norwegian Idol Show and toured with him. Issa has also performed on many Metal and Rock records including albums by Gaia Epicus and Illusion Suite. Issa has also played over 400 shows with Norwegian artists such as Postgirobygget, Dde, Jahn Teigen etc.

The songs “I’m Alive” and “Angels Crying” can exclusively be listened to in full by streaming on the Frontiers Web radio from July 13th. Tune in at www.frontiers.it/webradio.