Italian rockers Easy Trigger release video for “One Way Out”

Italian hard rockers Easy Trigger have released a video for their song “One Way Out”  which will appear on their new album Ways Of Perseverance, which will be released via Street Symphonies Records on September 30, 2016.

Street Symphonies Records will release “Ways Of Perseverance”, the new album by Italian hard rockers Easy Trigger, on September 30th, 2016 on CD and through all digital services. The album, whose artwork was realized by Ilpier.it, will be distributed by Andromeda. “The writing process for our new album, started already during the “Bullshit” promotional tour, has been very difficult, long and full of surprises” – said guitarist Caste – “We realized that we didn’t want to give up precisely during the line-up metamorphosis. With new drummer Fabio “Pane” Ferrari joining the band, the whole band’s style, groove and writing process were changing with a more professional tendency, thanks to his and new singer Nico‘s backgrounds.

With a new frontman, the band could re-start with renewed verve and passion. Nico started immediately working on the lyrics, representing an absolute priority for him: some were born during his trips between Verona, where he lives, and Turin, where he has attended University. He was essential also for the arrangements, giving to the band’s sound a blues touch! The first step was to realize the videoclip for “One Way Out”…, a catchy straightforward song, representing a perfect teaser for the sound of “Ways Of Perseverance”, an album we are eager to publish and play live, that we are proudly releasing, once again, under the label of our debut album Street Symphonies Records”. 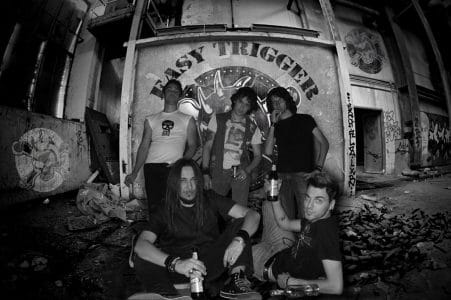 Easy Trigger‘s “One Way Out” video:

Official Music Video for “One Way Out”, taken from “Ways Of Perseverance” scheduled for release in September. Directed by Cesare AmbrogiPhotography: Daniel C…