Hangarvain will be releasing their second album Freaks on March 8, 2016 via Volcano Records. 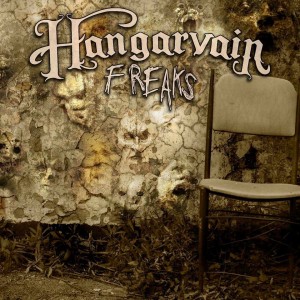 The group’s bio on its Facebook page states (with slight edits):

“South Italian rockers Hangarvain started their journey in music in early 2013. When the first song “Free Bird” was released in June 2013, it reached the position number 2 of Reverb Nation Italian Rock Chart and more than 5,000 single users saw its related video on Youtube during the first weeks. In November, the band released a second single called “Through The Space And Time” and flew to England to play a gig at remarkable live club Nambucca in London as headliner.

Hangarvain officially released their debut album entitled Best Ride Horse for the Italian rock label Red Cat (Audioglobe Distribution) along with a new single called “Get On” in May 2014. From the album release in almost a year, the band did more than 80 gigs all around Italy to promote the album Best Ride Horse and shared some shows with famous artists such Fabio Lione (Angra, Rhapsody Of Fire), Pino Scotto, Diaframma, DGM, Sad (European Metallica Tribute Band) and Y&T (from the Hangarvain + Y&T show in Rome in October 2014, they took the images for the new single’s video “Knock Back Doors”). In May 2015, the band did a 10 date tour sharing 5 gigs in Italy and Austria with the Norwegian glam rock band Niterain. Now Hangarvain are working and pushing hard to deliver a pure and solid rock proposed as their best with the new album called Freaks that will be released on March 8th, 2016. Meanwhile, they keep playing around to promote their music as much as possible in Italy and Europe (a tour in Spain planned for February 2016).”

Hangarvain’s music video for “Keep Falling” from the album “Freaks” out on March 8th 2016 by Volcano RecordsBuy Freaks atwww.hangarvain.comhttps://www.amazon…