Mastribes featuring lead vocalist Michael Flame have replaced the three other band members with new ones and have now unveiled their new line-up.

The following message was posted on Mastribes‘ Facebook page with translation earlier today (with slight edits): 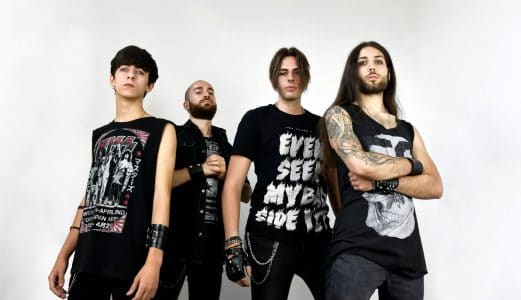 “It’s been almost three years since the name “Mastribes” has been in the musical landscape.

Since then we have never placed a limit on our music or creativity, the goal has always been to play at the highest volume the genre we most love… that is rock ‘n’ roll.

We don’t care who thinks otherwise, criticism or who in the past tried to manipulating, the mastribes are and will forever be this… a runaway train on which anyone is free to climb.

Always running at high speed, however, has its risks, since not everyone can hold this pace…

Inevitably, there has been a mandatory parking for almost two months, a period in which, with the support of all our friends and collaborators, we have worked constantly and assiduously to present to you today the ultimate framework of the band.

We are therefore extremely excited to present the new line up which includes, directly from the Jumpscare, Vic M Jumpscare (lead guitar), Enrico Esposito (drums) from Dissolve, and Francesco Sacco (bass) ex-Hangarvain.

They are the new faces that will enrich the band’s sound and make it unique to the dirty adventure we are going to hunt.

We will have plenty of things to do, but for now we can already tell you that we are about to enter the recording studio and that by the end of July we will give you a new single from the title ” Body Talk!!

Stay connected to the page because we will reveal more details, including the date of exit!

Thank you all for your affection, support and for always believing, perhaps more than us, in the band.

We’re finally back…LOUDER THAN BEFORE!”

Mastribes‘ “She’s Got The Look” video:

Mastribes – She’s Got The Look

New single by italian band Mastribes. First full lenght of the band will be released in fall 2016 by Volcano Records.Directed by Francesco GarofaloCo-Produce…