Pescara, Italy based sleaze rockers Twisted have released a video for their new song “Break The Walls” which will be featured on the band’s upcoming first full-length album. 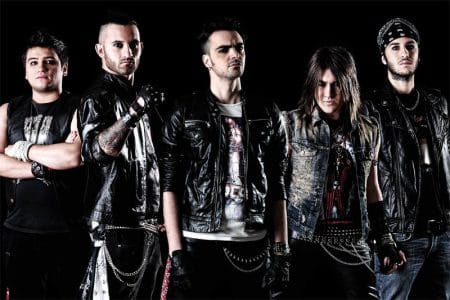 “Break The Walls” is the brand new video from italian hard rock/ sleaze band Twisted. The song is the first single off their upcoming first full-length album, follow-up to 2016’s EP “Dancin’ On Chaos“. The band will be supporting Reckless Love for their show in Milan (Italy) May 5th. The video was shot and produced by Federico Antonaci for Make It Studio.”

I have no idea if Twisted had a part in it but it seems that there was some sort of organized attempt by Twisted fans to vote Dancin’ On Chaos to the top of the Sleaze Roxx Readers’ Top 20 Albums of 2016. While everything was done within the voting rules established by Sleaze Roxx, it does cause some concern that Dancin’ On Chaos‘ finish at #5 is not purely “organic” and more contrived than anything else. In addition, if you take a look at all the other bands that are featured on the Sleaze Roxx Readers’ Top 20 Albums of 2016, all either had at least one prior album under their belts or they have group members that gained some notoriety in prior bands. At the end of the day, I’ll likely never really know whether the votes for Dancin’ On Chaos were contrived or not but whatever the case, it’s an impressive finish for Twisted‘s debut EP.”