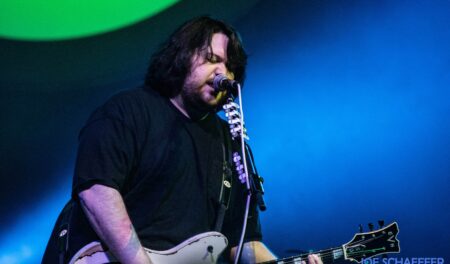 Wolfgang Van Halen dazzled the world with his guitar performance at the Taylor Hawkins Tribute Concert on September 3, 2022.  Eddie Van Halen‘s son played guitar on two Van Halen classics — “On Fire” and “Hot For Teacher” — along with Justin Hawkins (The Darkness) on lead vocals, Dave Grohl (Foo Fighters, Nirvana) on bass and Josh Freeze on drums. 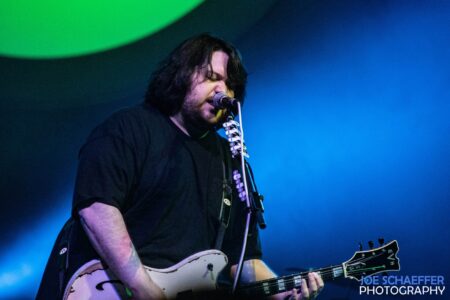 “Now, first and foremost, I have to put it out there that the following is simply the view from Sleaze Roxx‘s editor-in-chief after seeing a video of Wolfgang Van Halen absolutely tear up two Van Halen classics (“On Fire” and “Hot For Teacher”) while performing live during the Taylor Hawkins Tribute Concert on September 3, 2022….

I have to say that I was always of that mindset that Van Halen could not possibly continue without Eddie Van Halen.

But that was until I saw a video of Wolfgang Van Halen playing guitar at the Taylor Hawkins Tribute Concert on September 3, 2022. Wolfie played guitar on two Van Halen classics — “On Fire” and “Hot For Teacher” — with The Darkness‘ frontman Justin Hawkins handling lead vocals, Foo Fighters frontman Dave Grohl on bass (is there any instrument this man can’t play?) and whomever they had on drum duties. Wolfie absolutely killed it. But perhaps the most important thing is that it felt so right and so good to have Wolfie playing his father’s guitar parts….

I am sure that others have thought about it but I’ve never seen the idea really thrown out there.

This idea should have struck me a long time ago since Wolfie played all the instruments (including guitar) on his debut “solo” record Mammoth WVH. That being said, I had never seen or heard Wolfie play guitar on a Van Halen track.

I now think that Van Halen should continue with Wolfgang Van Halen on guitar, Alex Van Halen on drums, Michael Anthony on bass, and David Lee Roth and/or Sammy Hagar on lead vocals.”

Ever since his father Eddie passed away almost two years ago, Wolfgang Van Halen has been rather negative towards any suggestion of a Van Halen reunion and this was the case once again. Renowned author Greg Renoff tweeted a link to the Sleaze Roxx article on September 7, 2022 with the word “No” on his Twitter account and Wolfgang Van Halen retweeted the post with a picture of Bugs Bunny blowing the word “no”. 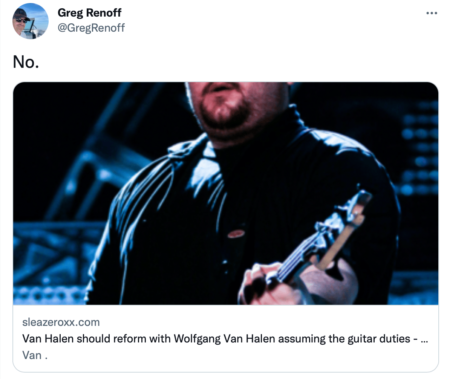 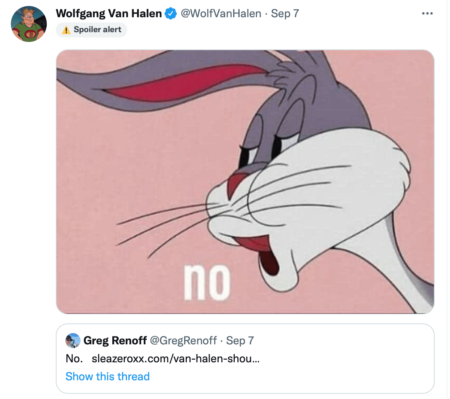