Guitarist Izzy Stradlin reportedly was rehearsing with Guns N’ Roses at one point and turned down a five figure fee per cameo prior to the much publicized Guns n’ Roses reunion kicked off in April 2016. 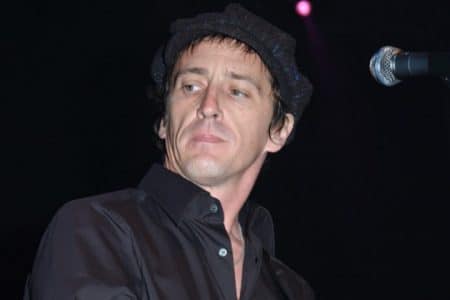 On the Forum board of the GNRtruth website, MSL admin stated as follows on September 8, 2016:

And even if Richard didn’t have the spot, the loot isn’t being split equally among Axl/Slash/Duff, so why would Axl want to have to split it equally with Axl/Slash/Duff/Izzy?

GNRtruth‘s position has been clear since day one and we took a lot of flack for reporting the falling out was over money and again we’ve been vindicated.

But Izzy‘s tweet is misleading IMO as he was in rehearsals to do a guest spot and equal pay was never being discussed. It was just a question of what he would get per gig for his guest spots and the two sides ended up being very far apart on money….

Nobody is being paid equally now, why would that change with Izzy on board?…”

2:25 am –“… but we know izzy was in rehearsals at one point and was negotiating to appear at a few of the april gigs. equal pay was never discussed. a 5 figure fee per cameo is what was being negotiated. but there is a lot of room for negotiation on a 5 figure fee. 😉 10k? 99k?

whatever it was, they were far apart and izzy bailed. he doesn’t need their chump change and they don’t need to throw away a bunch of money on a guy that isn’t gonna sell many tix.”

MSL Admin on the GNRTruth Forum website also indicates that singer Axl Rose, guitarist Slash and bassist Duff McKagan are all getting different shares of the current pie of Guns N’ Roses’ Not In This Lifetime Tour. This would appear to make sense considering that when Stradlin left Guns N’ Roses back in the early ’90s, the net profits between the remaining founding members sometime in 1992 were reportedly 36 1/3 to Axl, 33 1/3 to Slash and 30 1/3 to Duff.

Last week, Stradlin made headlines when he posted the following succinct but telling message on his Twitter account:

“Bullshit
They didn’t want to split the loot equally . Simple as that . Moving right along……..”

Guns N’ Roses‘ Not In This Lifetime Tour has to be deemed a financial success as the group’s 25 date North American leg alone generated just under $117 million from June 23, 2016 to August 22, 2016 with the group reportedly playing to over one million people during that time span and averaging over $4.5 million per concert.