Night Ranger frontman Jack Blades was recently interviewed by Bobby Caughron at XSRock and was asked amongst other things about Damn Yankees recording or performing in the future. 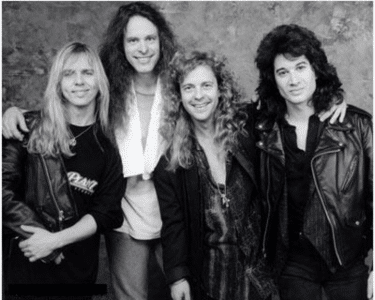 Blades stated: “Boy, I don’t know. I sure would love it. The Damn Yankees are a great band. We had Tommy (Shaw) and I and Ted (Nugent) jamming it out and Michael Cartellone on drums pounding it away. I’ve tried to put that together so many times and right at the end somebody says “Oh, I can’t do it then or this and that. It just kills me that we don’t do that, because I think it would be a fun thing to do for a month or something like that. You know, just go out and do like a month’s worth of dates. Maybe someday we can get it done. But it doesn’t look like it’s going to be happening in the near future.”

XSRock asked Blades what he would change or do if he could do things differently in Night Ranger‘s 35 year history. Blades replied: “That’s a great question. That’s a really hard one. Because when things go this way or that way, like when things happen like in 1989 when the band called it quits, if it hadn’t been for that, then no one would have had the Damn Yankees and we wouldn’t have songs like “High Enough” or “Coming Of Age”, so it’s hard to say what I would do. I think the one thing that I’d do again is I would have focused more and worked harder on the songs on the “Big Life” album. Because, I think we were just on this roller coaster and we were just going and going. It was almost like hamsters in a cage. We go on these whirlwind tours and then go in and record for three months and then go on another 18 month tour. I think for myself, I blame myself. If I had written more songs from the heart rather than writing songs that people will think is a hit. When you’re caught up in all of that crazy ride, it’s hard to get off and instead write things from your soul. I think I learned that lesson. And, I think the Damn Yankees benefited from that.”

In terms of his greatest accomplishments, Blades stated: “My greatest accomplishment is that we’re still standing 35 years later. And Brad, Kelly and I are as tight as ever. I think that’s a great accomplishment. For me personally, I love the fact that I’ve been married for 40 years. I think my greatest accomplishments are my two sons and now I have grandsons. I think that’s my best accomplishments. Being able to write songs that help people through their lives is one of the greatest feelings. I’ve gotten letters from people where, this one guy said he didn’t commit suicide because he had read lyrics that I had written and I thought to myself, if that is the one reason that I even exist in this world, to come up and create a song that the lyrics kept this guy from doing the worst thing that he could have done in his whole life…then that makes me really happy. I’m very happy at this stage in my life with and what the band has accomplished over the years. I’ve had people tell me that the song “Goodbye” helped them get over a loss and when you write a song, that’s about as close to a glimpse into a person’s soul as you can get. When people can feel the same thing that I felt when I wrote a song then that really gives me a tremendous sense of accomplishment. That and signing my autograph across women’s breasts (laughs)…sorry I just didn’t want it to get too heavy so, I threw that in to lighten the mood a little.”

You can read the rest of the interview with Blades at XSRock.