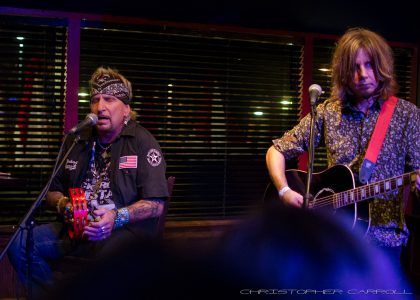 Jack Russell’s Great White frontman Jack Russell and lead guitarist Robby Lochner have teamed up along with bassist Rick Travis and drummer Geoff Reed to release a “lockdown” style video for their cover of Steppenwolf‘s classic track “Born To Be Wild.” The video was done by Jaymz Eberly of Eberly Productions Inc. and the song was mixed and produced by Lochner. Reed did not take part on the video.

Sleaze Roxx recently interviewed Lochner and asked the guitarist how far back that he went with Russell to which he replied:

“I first met Jack in March of 2011 through his former drummer [who then became the early drummer for Jack Russell’s Great White] Derrick Pontier. I met Derrick though Dario [who was the bass player early on for Jack Russell’s Great White] when Dario brought Derrick to a ‘NAMM Jam’ I was doing in 2011. I invited the two guys onstage and the three of us played a 30 minute set ‘off the cuff’ that went over pretty well. After that, I kept in touch with Derrick and he brought Dario and I out to the desert to meet with Jack about doing his solo band. In early December of 2011, I met with Jack again. He was now living in Redondo Beach and he asked me to join him in Great White, because he was firing his other band, and here we are going on nine years.”

Jack Russell and Robby Lochner‘s “Born To Be Wild” video: