Former Great White and current Jack Russell’s Great White frontman posted a video on Facebook to dispel rumours that he had to be hospitalized and was really sick when he was unable to perform a concert scheduled in Carlton, Minnesota, USA on March 18, 2022.

Metal Sludge posted an article earlier that day with the following heading: “VERY ILL … Jack Russell taken to area Hospital in Minnesota, his illness is unknown and tonight’s JRGW show has officially been canceled“. The Metal Sludge article indicated in part: “Our initial source in Minnesota is quoted as saying: “Jack looked really bad (this morning) when arriving after his flight landed, and was immediately put in a wheel-chair and taken directly to a hospital.”“

A video was posted shortly after on Jack Russell’s Great White‘s Facebook page March 18th at 9:08pm where Russell stated (as transcribed by Sleaze Roxx):

“Good evening America! Jack Russell here, live from my hotel room in Minneapolis — Duluth actually, Duluth, Minnesota. I heard rumours that I’m really sick and I’m in the hospital. Well, the fact of the matter is is that I tested positive for the “Monochrome”, “Monochroma”, whatever it is, “Monochrome” — I don’t even know the name [someone in the background indicates “Omicron”] — Omicron variant of Covid and I couldn’t do the show tonight because it would obviously, it wouldn’t be ethical for me to expose anybody and I don’t want to get anyone sick but I feel fine. I really don’t have any symptoms but I tested positive so I have to take all the precautions that I can. But for all the [inaudible] out there, I was reading all this information or misinformation about how I was in the hospital and how I was sick and I was dying and all this other stuff. Jus so you know, I feel fine [laughs]. Thank you for being so concerned.” 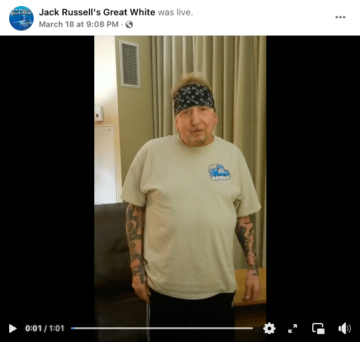