Former and original Great White lead vocalist Jack Russell had some choice words for the current Great White singer Mitch Malloy as the former accused the latter of needing to sing with some balls and to get the lyrics right.

was the frontman for Great White from their inception until 2010 when he was replaced while he dealt with various health issues. Russell was official replaced by XYZ singer Terry Ilous until July 2018 when the latter found out through the internet that he had been replaced by Mitch Malloy.

Metal Sludge reported that Russell posted the following comments via his personal Facebook account this past weekend:

“Mitch Malloy, I have watched a few videos with you and my old band. I guess I’m bored, but let me give you a piece of advice from a Multi-Platinum, Grammy Nominated Singer.

I don’t usually comment on anyone who has replaced me, but for God‘s Sakes, sing with some balls and get the Fucking lyrics right!

At one time Great White was an Amazing Rock Band! That music speaks for its self!

In my opinion, you have a nice voice.

However, Great White requires more than a nice voice. If you are going to try to be Jack Russell, give it up! At least Terry put his own spin on it!”

Interestingly, Great White founder and lead guitarist Mark Kendall was interviewed by Shaggy of Idaho’s 94.9 & 104.5 The Rock radio station back in August 2018 and opined that Ilous was an amazing singer but did his own stuff vocally when singing the Great White material and that might have been “a hair too much.”

Below is Russell‘s Facebook message as posted by Rock Talk with Mitch Lafon yesterday: 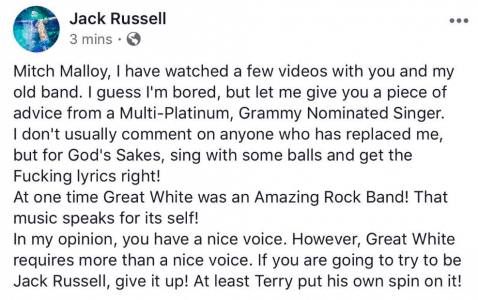