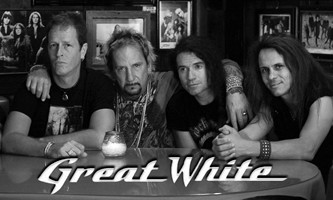 If having two versions of L.A. Guns touring at the same time wasn’t confusing enough, add Great White to the list. Vocalist Jack Russell, who has been recovering from a perforated bowel suffered in 2010, has announced that he will be making a comeback with a brand new band called Great White featuring Jack Russell.

“Just wanted to announce that I will be coming back with my band Great White and a BRAND NEW line-up,” said Russell in a recent Facebook post. “My new bandmates are some of the most incredible musicians I have ever had the privilege to play with — Matthew Johnson former guitarist for Great White, Derrick Pontier former drummer for Great White, Dario Seixas former bassist for Firehouse and the Stephen Pearcy Band, and Robby Lochner former guitarist for Rob Halford’s band and Cherie Currie. I am very excited about this new beginning.”

“I am feeling better than ever, despite any rumors you may hear to the contrary,” the longtime Great White frontman continues. “Unfortunately, and as confusing as it will be, my former bandmates and their manager have decided to continue to tour next year under the name I created, Great White. I will be touring under the name Great White featuring Jack Russell, to try avoid any confusion. So now the true fans will know the difference. I will be announcing tour dates as soon as they become available. Our first performance will be at the Pre-NAMM Jam (on) January 14 2012. Only shows advertised as Great White featuring Jack Russell will include myself on vocals.”

“I have missed all of you terribly and look forward to seeing you all on the road,” Russell wraps up. “You have no idea how much your love and devotion has meant to me during what has been one of the hardest periods of my life. Happy Holidays! Much peace and love to you and your families. Have a blessed New Year. Yours as always, Jack Russell, founder and lead vocalist, Great White PS. JACK IS BACK!”

When Jack Russell became ill the band fullfilled tour commitments by recruiting Warrant’s Jani Lane and finally XYZ’s Terry Ilous to handle lead vocals. Apparantly Ilous has been working out so well that they have decided to continue with him at the helm.