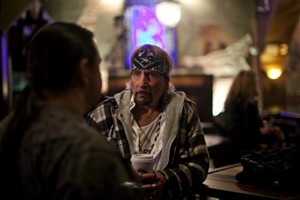 Jack Russell On Station Nightclub Fire, “I Never Meant To Hurt Anybody”

February 20th marks the 10th anniversary of the Station nightclub fire in which a hundred hard rock enthusiasts perished when pyrotechnics during a Great White concert set the Rhoad Island club ablaze. Former Great White frontman Jack Russell rarely talks about the horrific event, that claimed the life of bandmate Ty Longely, but opened up to The Boston Globe in a recent interview after his own ‘tribute’ show — a few excerpts can be read below.

Jack Russell, 52, has fallen a long way since that night 10 years ago when he preened before a packed house in The Station nightclub, before his band’s pyrotechnics turned the place into a deadly inferno. In minutes, the front man for the fading ’80s hair band, Great White, became a vilified figure in a national tragedy, not just for his role in starting the fire, but for his seeming insensitivity: He talked about the band’s upcoming summer tour even while The Station burned before his eyes.

Russell had hoped to do something positive earlier this month for the 10th anniversary, headlining a concert to raise money for a permanent memorial at The Station site in West Warwick, R.I. But fire victims and their families would have none of it; he remains a pariah in their eyes. A statement from the Station Fire Memorial Foundation said simply, “We feel the upset caused by his involvement would outweigh the amount of funds raised.”

Rock fans apparently weren’t keen on Russell’s idea either. Only about 30 people showed up to see “Jack Russell of Great White” in the Saint Rocke concert hall on the Pacific Coast Highway near Los Angeles, raising an estimated $180, even after Russell announced he would donate the proceeds to the son of his guitar player, Ty Longley, who perished in the fire. “It was supposed to be a tribute,” he later said, sheepishly.

That’s the way it’s been for Russell, who was never criminally charged in connection with the fire, but who never made peace with survivors either. In fact, Russell seems to have a penchant for antagonizing critics, like getting a facelift in 2006 because “the look in the mirror just doesn’t represent how I feel inside,” which some saw as insensitive to people disfigured by The Station fire.

“He never even apologized” for his role in the disaster, said Gina Russo, who survived the fire with horrible burns; her fiance was killed. “Everyone would look at this differently if Jack Russell would stand up and say, ‘I’m sorry,'” she said.

Today, Russell acknowledges the disconnect, saying, “I never meant to hurt anybody.” But he prefers to remain publicly silent rather than debate whether he has shown enough contrition.

“It’s been almost 10 years and no matter what I say it’s never going to make anybody feel any better about it, and sometimes it might make them feel worse, so I really would rather not say too much, you know,” he said as he headed for his dressing room after the benefit.

Russell initially balked at a Globe request for an interview — he rarely talks to the press. But he agreed to open up the next morning, welcoming a reporter to the 45-foot fishing boat that he calls home to discuss everything from his bitter split with his band mates to his battles to stay sober to the tragedy that sent him spiralling.

“After The Station, I was really down, was taking anything I could take,” he said. “I would just sit for hours and cry.”

Russell wouldn’t say whether he felt partially responsible for the 100 deaths in the fire, though friends say his broken body is a form of self-punishment. For his part, he still expresses surprise at his unwanted place in history.

“All I ever wanted to do was be a singer,” said Russell, still looking the part of a rock star with dangling earrings, four on each side, and his trademark, pirate-style bandana over long, sandy blond hair. “I just hope that I put more into this world than I took out of it.”

Russell recognizes the animosity toward him, saying, “I can’t imagine how people feel who lost like their wife, lost their son, lost their daughter, lost their husband or whatever, I can’t imagine the depth of their pain.” But he said people should realize that the fire haunts him, too. “This was a life-changing event for everyone,” he said. “It’s not like something I forget about.”

Read the entire Jack Russell interview at The Boston Globe