Jack Russell’s Great White frontman Jack Russell and guitarist Robby Lochner apparently enlisted a number of friends to do a video of their acoustic cover of Toto‘s classic song “Hold The Line.” 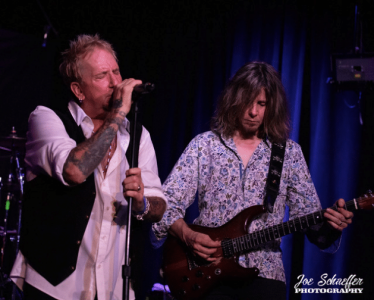 The video was mixed by Lochner and mastered by Harold LaRue while the video editing was done by Jaymz Eberly of Eberly Productions.

In an interview with Ruben Mosqueda for Sleaze Roxx, Russell was asked whether the Great White songs on Jack Russell’s Great White‘s recently released acoustic album Once Bitten Acoustic Bytes all had acoustic roots in their early workings.

Russell replied: “Well, that’s how we would start. I personally have always thought, if a song sounds good with just an acoustic guitar and vocal, then it could be a great song. That is, depending on what you do with it, you can take that song and make it a hit or you can ruin it. If it starts sounding good with just a guitar and vocal, then you have a great shot. I like to let my hands off the wheel and allow the song to express itself and evolve into what it will become. I’ve learned that over time, you have to know when to let go of the wheel.”