Russell was asked whether it was business as usual or whether there were signs for concerns during the early part of the ’90s decade about the incoming grunge movement and change in musical landcape to which he replied (with slight edits): 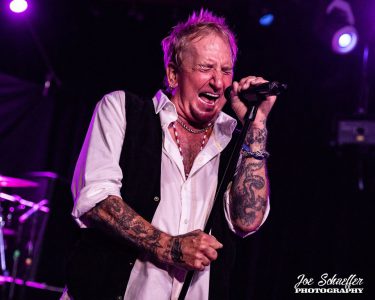 “Yeah there was an alarm bell. We went from selling three million records to 750. And it was like, “whoa…wait a minute.” You know, that’s quite a bit a difference there. And the formats at radio stations changed…it was all Nirvana, Nirvana, Nirvana.  You know, I can’t say I blame them because so many bands that got signed got signed because of their look. Record companies were like these guys are selling records, they’re on MTV…look at how cute they are. Look at their hair….God, the chicks will go crazy.

When it didn’t become about the music anymore, it was about the look. And then you take that look and you put it on the radio and the songs didn’t hold up without the video… So nobody really cared and everything started to sound the same. It sounded homogenized and pasteurize and lugubrious. It wasn’t Rock anymore…it was like a Xerox copy. The more you make the less clear from the original it gets. There was like 98 Guns ‘N Roses, 45 Ratts, 15 Great Whites, 27 Dokkens. There were all these clones of these other bands, but they were less and less and less like the originals. You don’t need more than one Dokken…you don’t need more than one Motley Crue. You know, you don’t need more than one Great White. Those slots are filled. You don’t need a company going out there, filling them all up… let’s make sure they have hair… It pulled the rug out from all of us. And people were so welcome for a change. They even settled for grunge, LOL.”

In terms of whether grunge had an immediate impact, Russell indicated: “It was a trickle down thing, sure. We were still out playing arenas with KISS in ‘92. In 94, we were still making records. It’s just that everything changed. And then with the invention of the internet, Napster, and all that stuff, all of a sudden there was no more music sales, no more record sales, it was almost pointless to make an album. But you make them because you’re a musician and you like to make music. That’s what we do. Some guys don’t make them at all. They just live off their laurels. Not me, I want to keep making records because I do it for myself. You know, I really thought there wouldn’t be anything worse than no more record sales until this Covid thing came out. And then I went, “There is something worse.””

You can read the rest of the interview with Jack Russell by Mick Michaels at The Cosmick View‘s website.