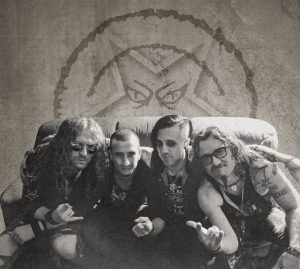 Back on July 15, 2016, Hell In The Club made the following announcement on their Facebook page:

BREAKING NEWS: we are thrilled to announce that we just inked a deal with Frontiers Music srl. It’s a big step forward for us, we can’t wait to start this new journey!!!!! thanks to all our fans and to who supported us so far!!! ‪#‎hellintheclub‬ ‪#‎newlabel‬ ‪#‎frontiersmusic‬

Back on July 15th, Frontiers Music Srl posted the following announcement (in part) on its Facebook page with respect to adding Hell In The Club to its roster:

BREAKING NEWS: Frontiers Music Srl is excited to announce the signing of HELL IN THE CLUB for a multi album deal!

Hell in the Club is the name of the rock n’ roll monster created by members of two of the most talented Italian heavy metal bands around: Andy (Andrea Buratto), bass player of Secret Sphere and Elvenking’s Dave (Davide Moras) on vocals.

With a lineup completed by Marco “Lancs” Lanciotti on drums and Andrea “Picco” Piccardi on guitar, HITC released three increasingly acclaimed studio albums which eventually brought the band to the attention of Frontiers, who decided to snap them up.

For the uninitiated, Hell In The Club mixes classic hard rock and modern sounds, heavy metal and party songs, ’50s rock n’ roll and anything in between.

Enjoy these two clips to experience the madness:

“Devil On My Shoulder”…

HELL IN THE CLUB – ‘Devil On My Shoulder’ official video

“Shadow Of The Monster”… 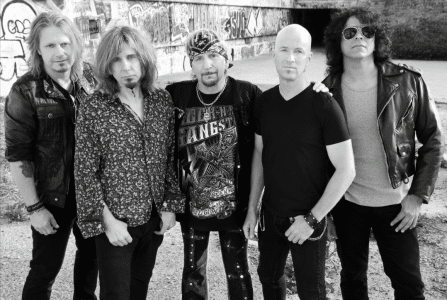 Excited to Announce we have signed to label Frontiers Music srl and are working on a new album to be released in 2017!

“I want to say how happy and excited I am about my band. I have so much respect for Serafino, Mario, Derek and their team and am so thankful to be working with them. The band and I are off the hook about the new material. You are going to love it! This is fun, first and foremost. I feel like I’m 27 again. I hope it sounds like Great White—but for 2016.” – Jack Russell

Since Jack Russell’s Great White inception in 2011, the frontman welcomed back longtime bassist and friend Tony Montana—this time as a guitar player and keyboardist—lead guitarist Robby Lochner (Rob Halford), drummer Dicki Fliszar (Bruce Dickinson) and Dan McNay (Montrose) on bass. The new album on the horizon, which is Jack‘s 14th studio album, boasts the bluesy hard rock stomp that made Russell an icon in the first place.

“I want to say how happy and excited I am about my band,” states Jack Russell regarding the recent signing with Frontiers for the new album. “I have so much respect for Serafino, Mario, Derek and their team and am so thankful to be working with them. The band and I are off the hook about the new material. You are going to love it!”

The GRAMMYs nominated Great White [Band] originally broke out of the Los Angeles scene in 1984 with its self-titled debut. The record was followed by the sophomore release “Shot in The Dark” and then by seismic platinum-selling outings such as 1987’s Once Bitten… and 1989’s …Twice Shy (which reached #9 on the Billboard Album chart). Moving over 8 million copies worldwide, they stood out as tried-and-true rock stalwarts into the 21st century until 2011, when Russell went on to form Jack Russell’s Great White.

In 2014 JACK RUSSELL’S GREAT WHITE gave fans a taste of new music with the release of the single “Hard Habit” which received rave reviews from fans clamoring for the “classic” early sound of GREAT WHITE. Listen to “Hard Habit”…

Ultimately, the new music is for the millions of fans who stuck by Russell all these years. It’s everything they’ve been waiting for and more. Russell leaves off, “this is fun, first and foremost. I feel like I’m 27 again. I hope it sounds like Great White—but for 2016.”

Frontiers plans to release the new record in early 2017.

JACK RUSSELL’S GREAT WHITE is currently performing various concerts around the U.S., for all dates and details visit the band’s website. Upcoming dates include: