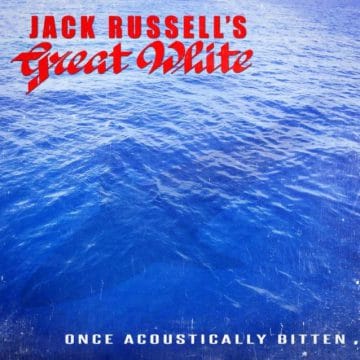 The release of the new acoustic album Once Acoustically Bitten from Jack Russell’s Great White may be delayed a little bit but the group has released one song — “Lady Red Light” — from the album for streaming in the meantime.

Once Acoustically Bitten was supposed to be released on July 14, 2017.

The following message was posted on the Facebook page of Jack Russell’s Great White on July 14th:

“Hey Pirates. Check out #ladyredlight from our upcoming “Once Acoustically Bitten” album. We wanted to release the album today but ran into some production issues. We are on the road and are going to finish asap. We appreciate your support.”

Sleaze Roxx stated the following in its review of Jack Russell’s Great White‘s latest studio album He Saw It Comin’:

“After all that Russell has been through, one might ask if he still “has it.” I am here to say that he does and his voice is still as strong as it was in the ’80s and ’90s. Case in point was when I saw him live in 2015 at the Grand Rocktember in Minnesota. He sounded amazing and I was blown away at how well the whole band performed. As I hinted before, if you are looking for a classic Great White album, I am afraid you won’t find it here. But if you listen to this album with an open mind and take it for what Russell has created, you just might find yourself enjoying this album as much as I do.”