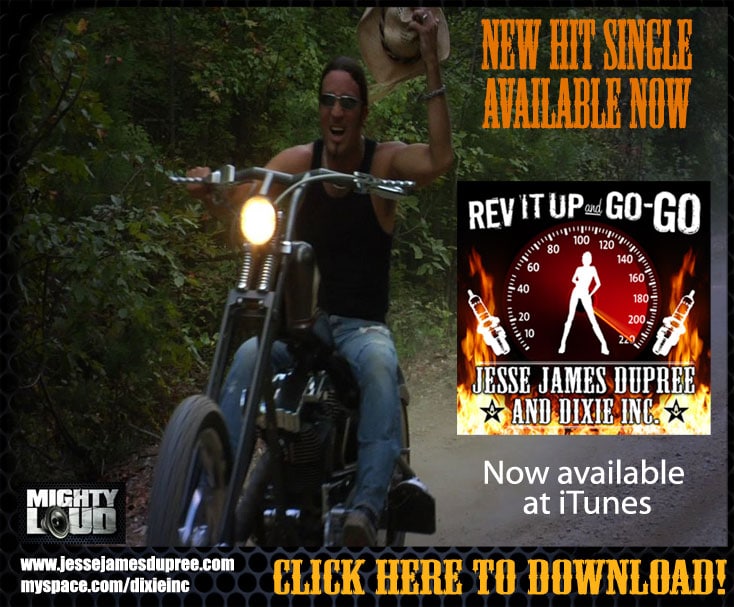 Jackyl frontman Jesse James Dupree has released the title track to his upcoming ‘Rev It Up And Go-Go’ solo album on www.itunes.com. You can also listen to the song on the band’s myspace page at www.myspace.com/dixieinc.

He’s a mass of impressive hyphenates: frontman-songwriter-TV/film producer and marketing consultant, most under the auspices of his own Mighty Loud Entertainment company. That’s just for starters. But music–as the outspoken, outrageous lead singer for platinum-selling Guinness world record holders Jackyl–is where Dupree first made his mark. And music remains the driving force in his life. That’s evident on Dupree’s second solo outing, REV IT UP AND GO-GO, a 15-track-collection ranging from the raunch ‘n’ roll of first single, “Rev It Up and Go-Go” to the in-your-face, gritty, nasty modern rock of the melodic “Drop Dead Ready.” Dupree name checks everyone from Ernest Tubb to Kiss to the Grand Ol’ Opry, while not shying away from more poignant songs like “1095 Days.” From the party to personal, Dupree leaves no stone unturned.

Like Dupree himself, Rev It Up And Go-Go ranges from one extreme to the other. Emphasis on extreme. “The first half of the record is intense, crunchy rock like you’d expect,” says the always-fired-up Dupree. “Then the back half is a retro radio show, shit-kicking country that sounds like an old-time radio show.” Sort of like “Prairie Home Companion” from hell, fueled by alcohol and innuendo. “It’s me along with a hodgepodge of kick-ass players and friends from the Southeast, which is why it’s Jesse James Dupree and Dixie Inc,” explains the front man. Rev It Up And Go-Go features Richard and Fred Young from the Kentucky Headhunters; drummer Mike Froedge from DoubleDrive; Charlie Starr from Blackberry Smoke; and Jackyl bassist and longtime collaborator Roman Glick. (As Dupree quips, “Roman is the Dennis Hopper in my life’s movie of Easy Rider.”) Rev It Up And Go-Go has an in-your-face immediacy. From the mid-tempo intensity of “Bite” to the scratchy, down-home feel of country-leaning tunes like ‘The Party” to the perfect summer, on-the-highway rock gem that is “Rev It Up and Go-Go” (which serves up a greasy, crunchy banjo that sounds like it was dipped in 50-weight motor oil and Jew’s Harp to boot) Rev It Up And Go-Go, quite simply, rocks.

Rev… started as a 2007 Thanksgiving jam, and spontaneously combusted into a full-blown several-day session. Laughs Dupree: “It manifested itself out of a couple mics and 2-inch tape machine and a bottle of liquor and some Crunk Energy Drink. It got good and messy.” As for the album’s diversity, Dupree is proud: “These days, boundaries aren’t defined in America. After a 40-plus hour week, when it’s time for people to kick it out, they want to do it loud, proud hard and honest. And they can do it just as intensely with ‘Rev It Up. To capture the appropriate vibe, the “Sunday Morning” (country side) tracks were recorded live. In a saloon. In Dupree’s home. (Of course, a man who brews and sells his own Jesse James “Americas Outlaw Beer” needs a personal saloon!) “Roman and I ride motorcycles 20,0000 miles a year, from tour to tour” adds Dupree, “so I wrote a song called ‘Money, Lovin’ and Speed’ for the late, great master motorcycle builder Indian Larry.”

Rev It Up And Go-Go is at once pure Jesse James Dupree, but also a bit of a departure, musically mixing both sides of his combustible character. “Hell, I grew up sitting on my dad’s lap watching Hee Haw and stealing sips of his Pabst Blue Ribbon. Rev It Up And Go-Go is a bit of an anomaly.” Yet throughout the 15 cuts are Dupree’s signature powerhouse vocals, his gravelly tinge as suited to metal or country–and everything in between. With Dupree’s irrepressible personality and thanks to the good ol’ boys of Dixie Inc.–especially Jackyl’s own Roman Glick (also an alum of Brother Cane, and Slave to the System with members of Queensryche)– Rev It Up And Go-Go is a cohesive, wild journey, at once as reverent and irreverent as its creator.

The fast-talking Dupree is always on the move, physically and mentally. In Dupree’s non-stop life as a marketing and musical mogul, following in the footsteps of like-minded rocker-entrepreneurs including Gene Simmons, Sammy Hagar, and Nikki Sixx, there’s still a big place for Jackyl. The lineup, who formed in the early ’90s, still play at least 60 shows a year, for old fans and new converts just discovering “The Lumberjack Song,” “Down On Me” and “I Stand Alone.” “Despite the rapidly changing and fickle music business, Jackyl is more viable than ever,” observes Dupree, who shifts seamlessly between his roles as rock star and businessman. ” We’ve got fans who are wearing Rob Zombie shirts losing their mind beside a kid in a Hank Jr. shirt. We’ve managed to thrive in a gray area that we turn RED.”

Gray is not a color associated with anything that Dupree does. The Georgia native is pegged in the red at all times, an intensely focused multi-tasker who is as creative and smart as he is outrageous. Dupree is PT Barnum combined with Virgin honcho Richard Branson. “I wake up every day and take as big a bite out life as fast as I possibly can,” Dupree laughs. And Jesse James Dupree has a very big mouth. Hence the name Mighty Loud Entertainment, and success with his company’s national and regional marketing and branding endeavors with the Full Throttle Saloon, Zippo Lighters, more than a dozen record labels, and Crunk! energy drink. Mighty Loud’s TV production arm created “Two-A-Days” series for MTV, the “Dirt Poor Comedy Tour,” and Pay-Per-Views including Sturgis X-posed with Stormy Daniels. Dupree also has two movies in development with and Live Free And Die Hard producer Arnold Rifkin. Clearly, with his myriad of business endeavors and the creative rock-and-country juggernaut that is Rev It Up And Go-Go, Dupree is just a guy who can’t say no. He concurs: “In all my endeavors, I see no reason to draw any boundaries. I don’t say no to anything as long as I’m confident I can over-deliver on all of it.”