Jagged Edge‘s debut EP Trouble (1990) and debut full-length album Fuel For Your Soul (1990) will be getting reissued as a double CD with bonus tracks via Bad Reputation Records in July 2021. The group features guitarist Myke Gray whose band Shades of Gray recently released a self-titled album and can be purchased via the guitarist’s website.

Track List for Fuel For Your Soul + Trouble+ Bonus Tracks: 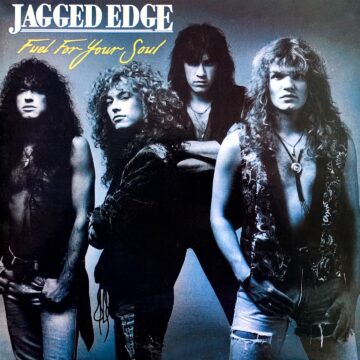 “A fairly notorious London based rock band led by guitarist Myke Gray, a man who has often been regarded by many as an immense guitar talent. Jagged Edge first came together in 1987 masterminded by Gray after his split from Dorian Gray.

After few differents line-up and few demos, Myke Gray retained the Jagged Edge name and linked up with Sanctuary Management, home of Iron Maiden and W.A.S.P., a liaison that resulted in a deal with Polydor Records in 1989. Gray recruited Italian drummer Fabio del Rio (Bruce Dickinson) and ex-Tokyo Blade bassist Andy Robbins to the group and promptly issued the first Jagged Edge release in the form of a mini-album entitled Trouble with Swedish vocalist Matti Alfonzetti, previously a member of Bam Bam Boys & Boxer (later Road to Ruin, Skintrade).

The band’s first full-length album, Fuel For Your Soul, produced by Jeff Glixman, found Jagged Edge grafting a support to visiting acts such as Dan Reed Network, Thunder and Vixen. An European support slot with then Iron Maiden vocalist Bruce Dickinson’s solo band ensued in 1990 before Jagged Edge undertook a headlining British club tour later the same year with support of Heartland. Despite the high profile shows and the hard work from Gray, Polydor dropped the band and Alfonzetti left to be followed by Del Rio. Without a record deal, Gray opted to split the band. After a brief flirtation with UFO in 1990 and abortive relaunchs of Jagged Edge under various guises including Phoenix, Bad For Good, Taste and Obsession, he surfaced in the more successful Skin.”