Jailhouse hint at something “coming soon for the fans” 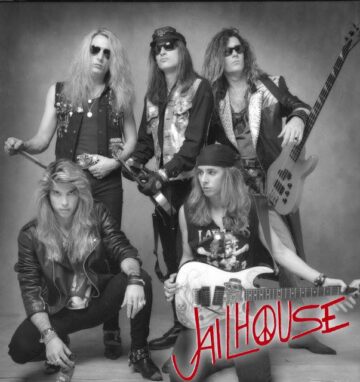 “Something is coming soon for the fans.”

Back in October 2011, Metal Sludge posted an article titled Reliving the story of Jailhouse, a band that many thought would be the Next Big Thing by Gerry Gittelson, which stated

“In a continuing theme, I’m again taking a look back at my favorite bands from the Sunset Strip, and one of them was definitely Jailhouse.

I was a huge fan and never missed a show, and a lot of folks really loved this band led by androgynous singer Danny Simon and a couple of ultra talented guitarists named Michael Raphael and Amir Derakh.

In fact, among the more surprising turn of events back in the day was Jailhouse not making it big.

Jailhouse seemed to have everything necessary for success – Simon could actually sing, and the band had great songs, a more-than-solid drummer in Dave Alford, and a loyal, devoted following.

Jailhouse did all the right things, too. The fivesome built their success steadily and were soon at the point of headlining the Roxy, the Country Club and other top venues. They produced a series of red-hot demos, none better than their first that included such gems as “Sweet Angel, “Love Me” and “Please Come Back to Me.” And Jailhouse also were generally nice people who hosted great parties.

It all sounds like a formula for success, so what went wrong?

Well, the band signed with Enigma, an independent label, instead of waiting to ink a deal with a major. So the group’s debut EP, “Alive in a Mad World,” didn’t fly even though it wasn’t a bad effort. Then, the scene kind of died down, and unfortunately, Jailhouse went down with it despite producing no less than three music videos.

Danny Simon has continued to try to make it via various projects, but he’s still waiting to strike it big. Raphael later found more substantial success with the modern rock band Neve, which had a big hit single in 2000 with “It’s Over Now.”

The band was signed to Columbia by none other than Randy Jackson, but it turned out to be a curse when Jackson left for “American Idol.”

“Neve was 50 times bigger than Jailhouse – we were touring with Kiss, and I felt like a rock star in Japan opening the Fuji Rockfest with Rage Against the Machine and the Black Crowes – but then when Jackson left the label, we were left hanging. No one else supported us at the label, and we got dropped pretty quick.”

Jailhouse looked great in pictures, but they didn’t always see eye to eye.

“When you ask me today, I don’t really remember much except it being five guys who really did not get along,” said Raphael, who, like myself, lives in Santa Clarita and has kept in touch through the years. “Everything kind of changed when we went from a four-piece to a five-piece. I think if we would have done songs about sex, drugs and rock and roll, we probably would have had a record deal. I do think we were better than most bands.”

Raphael thought the first batch of songs that really caught on, like “Sweet Angel,” were the best, as the band soon experimented with more serious lyrics and never got back to being a pretty boy pop-metal band, which was what Jailhouse was really good at.”

You can read the rest of the article Reliving the story of Jailhouse, a band that many thought would be the Next Big Thing at Metal Sludge‘s website.