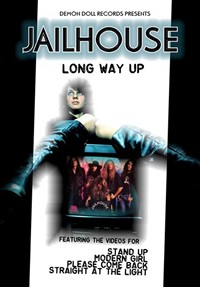 Dial the knob back to 1989! Demon Doll Records and Jailhouse have teamed up once again to crack open the Hair Metal vaults to release their video collection.

‘Long Way Up’ chronicles the historic footage that brought the band straight into living rooms all across the world. During the late 80’s and early 90’s, the groups sold out shows, rapidly growing fan base and hooks and looks attitude immediately caught the attention of MTV and the boys became a mainstay on the storied program ‘Headbangers Ball’.

This DVD, available at demondollrecords.com, consists of these videos, “Please Come Back”, “Modern Girl”, “Stand Up”, along with the brand new video “Straight At The Light”. Also included are very rare live performances throughout a three city trek in the USA as well as the legendary show intro that the band would feature before they stormed the stage.

This a great piece of Hair Metal history. No more need to strain your eyes on youtube to get a glimpse of these Hollywood hotshots, see them up close and personal on the screen of your choosing.

Crank the home stereo system to 11 and let the neighbors complain, let the cops come! This is Jailhouse; this is Sunset Strip Rock ‘N Roll!