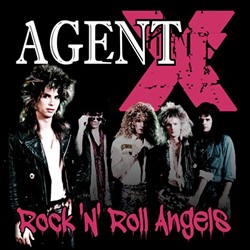 Demon Doll Records are cracking open the vault once again to unleash yet another Hollywood hair-metal beast. Going all the way back to 1987, the record label have struck more gold with a band that deserves its place among Sunset Strip lore. Demon Doll Records and Jailhouse singer Danny Simon have teamed up to finally deliver Agent X to your door with their six song CD ‘Rock ‘N’ Roll Angels’. The CD is being offered at an introductory price of $11.99, for the first two weeks only, and can be previewed and purchased at demondollrecords.com/agent_x.

Partially produced by rock legend Kim Fowley, of KISS and Runaways fame, and fronted by singer extraordinaire Danny Simon, Agent X delivers a six song masterpiece that could have easily found its way onto the 80’s soundtrack of our lives. The material is loaded with killer hooks and melodies that one can only raise the hair-metal flag and salute.

This CD was well worth the wait as they unveil the classics “Chasing The Night”, “Run If You Can”, “Falling In Love”, “Hard Road To Heaven”, “Out On The Streets” as well as the jaw dropping KNAC radio magnet “Rock ‘N’ Roll Angels”. This album simply hits the nail on the head and does not disappoint.