Black ‘N Blue frontman Jaime St. James was recently interviewed by Sleaze Roxx long-time contributor Ruben Mosqueda for Oregon Music News and was asked where he was at in terms of writing new material for the band. 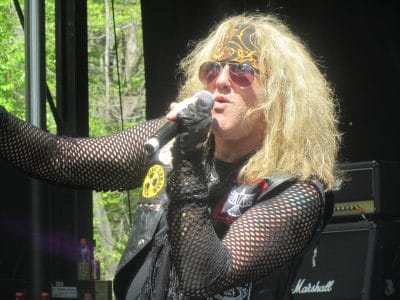 St. James responded as follows: “Not at the moment. I’m one of major songwriters and contributors in the band. I tell you just how frustrating it is to write, record and release a record isn’t going to get any attention or sell. There’s simply no money in it anymore. It’s all for artistic satisfaction. I love to write, I love being in the studio to record. I love the whole aspect of recording an album. If you do write a record there’s no chance that it will get any airplay at all.”

St. James also commented on why Black ‘N Blue have been asked to play at many festivals, etc in the last few years: “…I think it’s because we took the 90s off! [laughs] That’s a good question. It’s really hard to say for sure. We do get our fair share of festival invites. We were on the very first Monsters of Rock Cruise. We were asked the money was ‘okay.’ Our booking agent Sullivan Bigg at Bigg Time Entertainment said “Do it. Trust me, you’ll be making the right decision.” You’re right we get chosen a lot but we have been passed by on a few occasions. It’s really up to the promoters. We have a great booking agency so that helps too.

Also when I see a guy like Frankie Banali [Quiet Riot] he says “Every time I see you it reminds me that you were there from the beginning of this whole thing back in ‘82-’83.” I think we have a little bit more credibility because of that. I had to add that I listen to our albums and they hold water. We put all the money back into the records and it shows…”

You can read the rest of Mosqueda‘s interview with St. James at Oregon Music News.