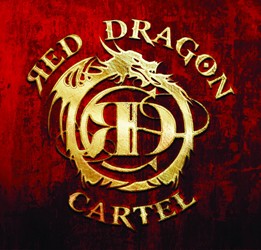 Former Ozzy Osbourne and Badlands guitarist Jake E. Lee is set to return with Red Dragon Cartel. The band will release their self-titled debut album on January 26th via Frontiers Records, followed by a world tour, and samples of the entire album can be previewed at Amazon.com.

‘Red Dragon Cartel’ represents Jake E. Lee’s first band and real album in 20 years. In collaboration with writer and producer Ronnie Mancuso (Beggars & Thieves guitarist), a project was started with successful producer Kevin Churko that developed into the Red Dragon Cartel. Initially recording with various well known vocalists such as Cheap Trick’s Robin Zander, In This Moment’s Maria Brink, and Iron Maiden’s Paul Di’Anno, Lee and Mancuso eventually decided that they wanted a permeant band. The new band members were culled from over a thousand submissions from a ‘Jake E. Lee needs a lead singer and drummer FaceBook page’, resulting in the perfect combination of English born vocalist D.J Smith and Vancouver based drummer/vocalist Jonas Fairley.

The album also features such guests as former Pantera bassist Rex Brown. Slash’s Todd Kearns and Brent Fitz, Five Finger Death Punch’s Jeremy Spencer and Kyuss’ Scott Reeder. With the majority of tracks recorded with the new permanent members, Jake E Lee’s Red Dragon Cartel is about to blast off. This amazing virtuoso guitarist with his new band will once again grace the rock world with the lights shining even brighter.

With the passing of his friend and Badlands bandmate Ray Gillen, as well as his wife, along with a general disillusionment with the music industry, Jake E. Lee withdrew and disappeared from the scene causing much speculation and mystery as to if he were to ever return. As Jake says, “There were all sorts of crazy rumors flying around the internet and although I certainly wasn’t an angel and admit to spending time on the dark side, I was never homeless, never arrested and as I may have put down the guitar for a while, I never stopped writing music. I just didn’t want to join some ’80s super-group. I have to keep moving forward musically. Not to say that I hate or don’t want money, but I’ll never compromise at the expense of my musical integrity.”

During this period of reflection, Lee was occasionally called out of retirement by good friend and Shrapnel Records owner Mike Varney. As well as being invited to play on many albums, he held fast to the belief that he would only seriously return if he could find a situation that would allow him to compete on the highest level and grow creatively. Only then would he decide to re-launch his career. In steps old friend Ronnie Mancuso, noted session guitarist/bassist, composer and producer, who was sharing a studio space at The Hideout in Las Vegas working with super hot producer, engineer and mixer Kevin Churko.

Mancuso and Churko started talking with Lee — and slowly, with the help of Churko’s son Kane (co-writer of Five Finger Death Punch’s “Remember Everything” and In This Moment’s “Blood”), started writing songs under Churko’s supervision based on literally hundreds of great riffs Lee had stored up from his years in seclusion.