Jake E. Lee states that Ozzy Osbourne was not fun and turned mean after drinking for a while 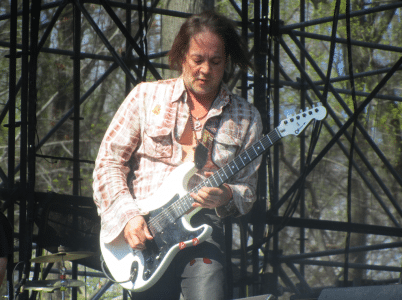 Speaking about how Ozzy was, Lee stated (as transcribed by Sleaze Roxx at 15:50 mark of audio recording):

“It was never fun to party with Ozzy, umm, ’cause, ’cause Ozzy, Ozzy when he’s sober is a sweet funny guy. He’s like one of the funniest guys I’ve ever met. He’s just he’s just fun to be around when he’s sober. And he is for a little bit just a tiny bit of a window there where he starts drinking and he’s still fun. Ummm, and then he just, and then a switch goes off and he’s just. He’s not fun. He is not fun. He turns mean. And just ugly and uhhh. If anything, seeing that made me cut back on the amount of partying I did. Yeah. It never was fun to party with Ozzy.

And there was times when he would knock on my door and it would be like 3:00 or 4:00 in the morning in the hotel. I’d be sleeping and I’d wake up ’cause he wouldn’t quit knocking until I opened the door and he’d come in, ‘I got this idea for a song.’ ‘Ahhhh. OK. Let me get my guitar.’ And [laughs] literally to me at least just like it sounds like, ‘OK. Play this.’ [Jake appearing to impersonate Ozzy making weird sounds] I’m like, ‘Holy shit. Can you hum that again?’ [Jake again appearing to impersonate Ozzy making weird sounds] So I’d play anything on the guitar. Anything like this and he’d say ‘Nooooo! Listen to me!’ [Jake again appearing to impersonate Ozzy making weird sounds] [Laughs] I’d sit there trying and oh God, I wish I…. after about the third time that it happened, I turned my tape recorder on so I could record all of it. And I’d play it back for him the next day and he just looked at me and just said, ‘Oh, I am sorry. It will never happen again.’ And thank God it didn’t.”

You can listen to the entire interview with Jake E. Lee on the Cobras & Fire Podcast.

Jake E Lee joins the program for a wide ranging conversation that covers everything from Ozzy wanting to write songs at 3:00 in the morning, Phil Soussan conspiring against him, not bonding with Ozzy, the Badlands manager trying to blackmail him, how he found out Ray Gillan was sick, the modern way of recording an album, Red Dragon Cartels latest record Patina and SOOOOO much more.