Quiet Riot‘s new lead vocalist James Durbin was recently interviewed by James Mayse of Noise Pollution and explained how he ended up replacing singer Seann Nicols in the iconic group. 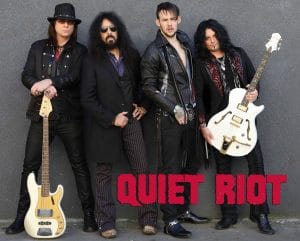 The following are excerpts from the Noise Pollution article / interview with Durbin:

Durbin didn’t “audition” for QR, exactly. Durbin was already working with Grossi, and Banali was a fan of Durbin’s vocal style. Even when things were still on-track with Nichols, Banali was interested in a musical collaboration with the young singer.

“I had been writing and demoing songs with Alex (Grossi) for a couple months for what would end up being our EP, ‘Maps To The Hollywood Scars Vol. 1’ when Frankie happened to randomly email me an instrumental song that hadn’t been used (for ‘Road Rage‘),” he said. “Since Alex and I were in the studio, I thought it’d be funny if I wrote lyrics and melodies to the instrumental (and) recorded it to send back to Frankie the same day — and that’s just what we did.

“Funny enough, that song wound on the ‘Road Rage’ album as the opening track ‘Can’t Get Enough’.”

You can read the rest of the article / interview with James Durbin at Noise Pollution.