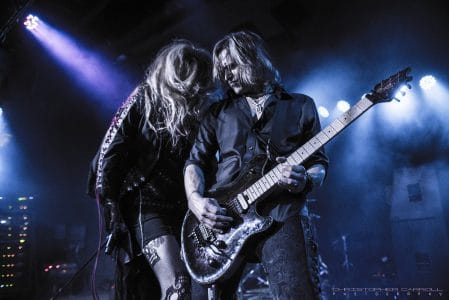 Husband and wife combo Janet Gardner (ex-Vixen) and Justin James have released a video for their new single “Wounded” from their upcoming album Synergy. The duo released two previous albums Janet Gardner (2018) and Your Place In The Sun (2019) but under the name Janet Gardner. It appears that going forward, guitarist Justin James will get his name on the “marquee” along with Gardner who handles the lead vocals.

Back in September 2018, Gardner and James were both interviewed by Christopher Carroll for Sleaze Roxx back and they were asked about their relationship and working together.

Gardner indicated: “Yes, you’re right. It’s very rare and it’s very hard to find. Obviously, I’ve been doing this a while. So yeah, when you find somebody that you have the chemistry with, you just bounce off each other constantly. He’ll have an idea… then I will… then he will go back and forth. It is very rare to find so we’re very lucky and that’s why we keep doing it.”