Former Vixen lead vocalist Janet Gardner and her husband / guitarist Justin James were recently interviewed by Christopher Carroll for Sleaze Roxx. Gardner and James have a new album titled Synergy that will be released via Pavement Entertainment on August 7, 2020. The first part of the interview was posted on Sleaze Roxx yesterday. The second part of the interview, which will be posted later today on Sleaze Roxx, contains information that Gardner had never shared before. 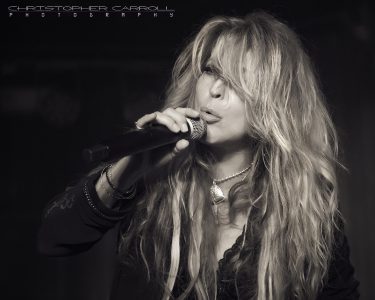 Carroll asked Gardner and James whether they had ever played on anybody else’s album or done any demos for somebody else? Carroll noted that we all heard stories like, ‘Don Dokken sang on the early Scorpions demos’, for whatever reason. Have you guys ever done anything like?

James cheekily responded which prompted laughter from all involved: “Well, on Whitesnake’s Whitesnake [album], [John] Sykes just couldn’t hit the note. So secretly, I came in. I’ve never told anybody that story.”

The guitarist went on to say: “Yeah, for me it was just, local people in the Chicago area and stuff. I mean, I’ve played with some great people before but never demoed, with anybody else, but you definitely have…. [he looks at Janet].

Gardner indicated: “Yeah, I sang on some different songwriter demo stuff. I don’t even know where the songs went. [Janet‘s eyes get wide as she remembers] Oooohhh!!  I know where one went!  It’s called Waiting For The Big One!”  YOU know THAT band!” Gardner added: ” Yeah, I sang on the original demo for that!” She then explained: “Yeah, um, we were working with, Rick Neigher and David Cole, who were also producing Femme Fatale and they [Rick and David] wrote the song. And I think it was maybe, possibly for Vixen. I’m not sure. It was towards the end of when we were recording. So they asked me to come sing it. So I did and then I didn’t hear anything about it until all of a sudden Femme Fatale did it. I don’t think I’ve ever told that story before.”

Femme Fatale‘s single “Waiting For The Big One” appeared on the band’s self-titled debut album, which was released back in 1988. The ironic part of course is that Femme Fatale lead vocalist Lorraine Lewis officially replaced Janet Gardner in Vixen back in January 2019.

Excerpts from interview with Janet Gardner and Justin James by Christopher Carroll on July 9, 2020 for Sleaze Roxx:

Femme Fatale‘s “Waiting For The Big One” video: