Iron Maiden guitarist Janick Gers was recently interviewed by Brian Davis for KNAC and he spoke about the group having different generations of fans attending its concerts. 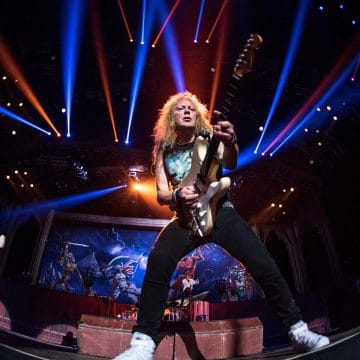 Gers advised: “I think we’re very lucky to have a young audience as well as all the people that come that have been with the band for years, and I think that’s because of our sense of honesty; we’ve always done what we believed in. We never tried to change or fit in with the fashions and the trends; and I think it’s just an honesty about the standard – we go out and we give everything, we’re known as a pretty amazing live band but that’s because we really care about everything, it’s really important. You get a lot of bands who will do the one-off gig, you know – they’ll come to London and then they’ll go up to the Provinces and not play so well & not take so much gear; we take our gear everywhere, we give everybody the best show we can possibly give ‘em. We have an honesty & integrity about this band and I think that’s why we’ve held on to a younger audience as well as our older audience.”

Gers continued: “It’s 110% every night; every single night, I don’t care where we are. It doesn’t matter whether we’re in Chili, Argentina, New York, L.A., Seattle, U.K. – it’s the same show every night; we give it our best. There’s always differences in… you know, you may be outdoors in the rain and there might be a tornado coming, but we give everything we’ve got and we give the best show we can possibly give every night. There’s an integrity to that and I think that’s perhaps why we’ve kept our audience.”

Youn can read the rest of the interview with Janick Gers at KNAC‘s website.

Sleaze Roxx recently attended Iron Maiden‘s Legacy of The Beast Tour stop in Buffalo, New York, USA and stated in its concert review: “This was probably the best Iron Maiden concert that I have ever attended and like a fine wine, the group seems to get better and better in a live setting. I was also impressed that since Maiden‘s last tour in support of The Book of Souls album, the setlist changed considerably since only four songs were repeated from that set (“The Number of The Beast”, “The Trooper”, “Fear of The Dark” and “The Trooper”). How many veteran heavy metal bands could successfully pull that off? Probably only one — Iron Maiden!”