Japanese all-female rockers Band-Maid have released a video for their song “Dice” which is the first Japanese sung song to be featured on Sleaze Roxx. 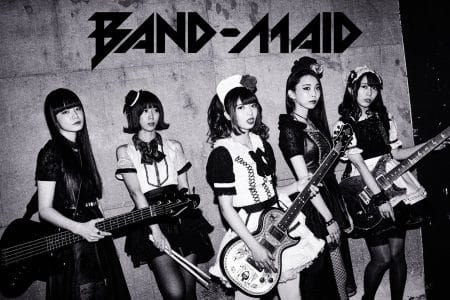 “BAND-MAID started out July in the year of 2013 and officially formed with current five girls in August. BAND-MAID is the Japanese all girls rock band with five members who dressed as maids.

Unlike their cute and gothic concept of maids’ uniform, their play is very authentic and classic. As they stick to their concept of Maids, they call their LIVE a “Serving” (お給仕) call their fans “Master and Princess”.（ご主人様、お嬢様）

With two main vocal, guitar, bass, and the drums, their live play is sure to rock their “Masters and Princesses.”

They attract you not only by their appealing visuals but also their promising sound. Their music video “Thrill” hit 2 million views within a two weeks on Facebook and also a million views has passed less than a year on YouTube.

Getting a lot of attention from outside of Japan they’ve made their USA debut in March 2016 at Sakura-Con, in Seattle. There were over 3,000 people in the crowd.

In response to their Masters and Princesses’ love from all over the world they are planning to go global to “serve” you with Japanese hard rocking sound.”