Nichols‘ “Biography” on his Facebook page indicates (with slight edits): 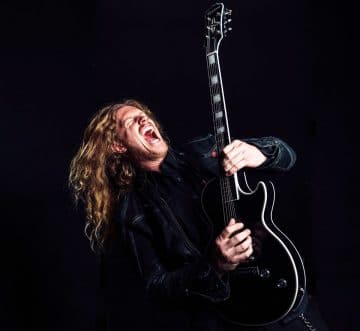 “You can’t teach the blues. It’s not something that can be codified in music books or learned on YouTube. It goes much deeper than that and it comes from the inside. It’s about the way the guitar strings are bent and the sound gets transmuted directly from a player’s soul. It’s simple at the end of the day. Either you’ve got it, or you don’t. Jared James Nichols has definitely got it. The Wisconsin-born, Los Angeles-based singer, writer and guitarist’s new EP Old Glory & The Wild Revival channels blues grit and gusto through bombastic arena-size rock ‘n’ roll. It’s raw, raucous and righteously real. As soon as he got his first guitar at 14-years-old, the stage immediately called to Jared. Maybe it had something to do with the fact that he grew up minutes away from The Alpine Valley Resort — where Stevie Ray Vaughan performed his last show. However, no divine coincidence could truly foreshadow just how adept at the six-string he would eventually become.

He personally traces the beginning of his story back to a blues jam that his mother brought him to. “Two weeks after I got an electric guitar, I was on stage with all of these old cats from Chicago playing the blues,” he recalls with a smile. “The music immediately resonated with me. It was all about the feeling and the soul behind it. None of these guys were music nerds. They were true blues guys playing what they felt. That power and reality struck a chord in me.” Soon, he found himself practicing for twelve hours every day. Hitting up the local jams, he ended up sharing the stage with legends including Buddy Guy, “Honeyboy” Edwards, and “Big Jim” Johnson as well as opening for Kenny Wayne Shepherd and Derek Trucks. By his 21st birthday, he had logged over 500 gigs. After a short stint at Berklee School of Music in Boston, he headed out to Los Angeles where he garnered numerous accolades at the world-renowned Musicians Institute, winning the 2010 Jerry Horton guitar contest, the 2011 Les Paul tribute contest, and the 2011 “Outstanding Guitarist” award.

2012 saw him release his debut EP, Live at the Viper Room, gaining the notice of both Guitar World and Guitar Player and inking a deal with Sony/MTV‘s Hype Music Publishing. However, everything simply laid the groundwork for Old Glory & The Wild Revival. Teaming up with Aerosmith engineer Warren Huart, Jared began working on the five-song set in early 2013. Honing his voice as a guitarist, songs like the first single “Let It Go” speak through a delta-style soul with the right amount of rock bravado. “That one is a blues rock song about love and give and take,” he reveals. “It’s got its own style and it opens the door to what I’m doing”. Elsewhere on the EP, “Blackfoot” charges forward with a riff as sharp as a tomahawk and a whole lot of spirit punctuated by Jessica Childress of The Voice‘s backing harmonies. “In Wisconsin, I was surrounded by Indian reservations and culture,” he continues. “I’d do casino and reservation tours as a kid. When I wrote the song, I was reading about all of these badass tribes. I love that spirit and vibe inherent in Native American culture.

The Blackfoot were truly bad motherfuckers. That lick is what I feel their culture represented.” On stage, it truly comes to life. Jared‘s presence becomes amplified with guitar in hand. Audiences have experienced that everywhere from his performances at NAMM and SXSW to the iconic Sturgis Buffalo Chip Festival where he will play alongside ZZ Top and Kid Rock and the Harley-Davidson 110th Anniversary in Milwaukee this summer. Ultimately, he lives up to that idea of Revival in the EP’s title. “I want people to get excited,” he concludes. “I want them to feel like anything is possible in this music. I want them to know great blues rock exists. If I can give someone the same inspiration I was blessed with, I’ve done something right.””