Dangerous Toys and Broken Teeth frontman Jason McMaster has released a video with his other “heavy metal” band Ignitor for a new song entitled “No Sanctuary.” 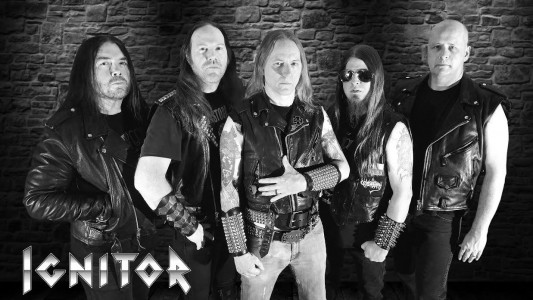 Ignitor‘s biography on their website indicates (with slight edits):

“Forged in 2003 by Stuart Laurence on lead guitar (Agony Column), Brendon Bigelow on bass (Death of Millions), Beverly Barrington on guitar (T.A.N.G.), Erika Swinnich on vocals (Autumn Tears), and Pat Doyle on drums (Offenders), who all wanted to start a classic metal band to fill a musical void in their hometown of Austin, Texas. Ignitor began turning heads in several countries after releasing a 6-song EP Take To The Sky to rave reviews in 2004, when Germany’s Rock Hard magazine named it “Demo of the Month.” Ignitor made their European debut at the Keep it True Festival in Germany in November 2005, where they stunned the crowd and were named “Best KIT Newcomer” by Mario’s Metal Mania magazine.

In 2015, founding members Brendon Bigelow and Beverly Barrington parted ways with Ignitor for personal reasons. The band recruited Robert Williams (Witches Mark) on guitar and Billy “Chainsaw” Dansfiell (Agony Column) on bass and began recording its 5th album for release in the summer of 2016. The band has formed a partnership with Dies Irae (Brazil) which will produce the new album as well as make the Ignitor back catalog available worldwide in all formats.”

“The place Jason McMaster holds in Ignitor is a very important one. Filling the shoes of the original singer, Erika, would have been a daunting task for most, but McMaster‘s command of metal forged new paths for Ignitor. He created a realm of evil and raging rivers of blood on his first collaboration, The Spider Queen – classic tales, told and twisted by McMaster‘s serated-egded voice, like axes grinding upon the microphone. Bold, beautiful, and dramatic heavy metal vocals for Ignitor‘s new wave of material, like Udo and Halford thrown into a blender of razor blades. A fresh but familiar taste from the chalice of metal, McMaster continues his onslaught with an even heavier sound for the next album, Year of the Metal Tiger, and ramps it up further with the ultimate metal tribute, Mix Tape ’85!”