Former Metallica bassist Jason Newsted was recently interviewed on the August 29 edition of the SiriusXM satellite radio show “Eddie Trunk Live” and was asked whether launching a new band like Newsted was harder than he thought it would be. Blabbermouth transcribed excerpts (with slight edits) from the Eddie Trunk Live interview including Jason Newsted‘s response to the aforementioned question: 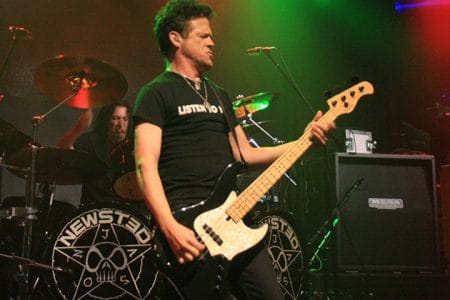 “Yes. I didn’t really know what to expect, ’cause I’d only ever know one kind of thing, and we [Metallica] were in the middle of helping pioneer it and kind of invent it as it went. And so making the rules and setting the standard is different than having to live by those rules later. And those rules kind of changed a bit or had to be altered or… No, no, that’s not true. The rules are the same, but there are a lot more people having to follow those rules and willing to play for less money and do things for less money following those rules. So that’s kind of what came down. There’s so many bands. We were talking about Download earlier, or some of the other bigger festivals we went to, and places that I played with Metallica at the end of the ’80s, early ’90s, all those festivals, where we would take five or six bands, if KISS or Deep Purple was headlining and we were second or third down the bill and Mötley [Crüe] and Black Crowes and whoever else was on the bill — Pantera or something — and then that five or six bands would bring sixty, eighty, one hundred thousand people to Donington. Six bands.

And then when I went with Newsted to Hellfest in Clisson, France, over three days [they booked] sixty bands to bring sixty thousand people. Sixty! Ten times as many bands to bring the same amount of people. Ten times as many bands to share the money to logistically have to deal with this and be on nine stages and compete for that dollar. So those things are not anything I could have predicted like that; I just wasn’t aware enough of those kind of things and didn’t pay attention like that. And I look at that, we were very courageous and maybe a little stupid and ballsy all at the same time — naïve even — after that, because, like I said before, I was only conditioned to the higher-level stuff, second- and third- and top-on-the-bill type of thing. I kind of skipped over any of that van touring or any of that stuff. I went right into Metallica from my truck, from Flotsam [And Jetsam]. So I had to kind of go backwards, unlearn and relearn at that stage. People were incredibly respectful because of the part that I did play in the big monster and giving us good slots on some of those big festivals — playing right before [Iron] Maiden on a couple of things. I mean, there was some pretty cool stuff that I could have never predicted on a first time out. But it was much more difficult than I could have predicted.”

Go to Blabbermouth for more transcriptions of other portions of the interview by “Eddie Trunk Live” with Jason Newsted.

Newsted‘s “King Of The Underdogs” video: