Twisted Sister founder and guitarist Jay Jay French was interviewed by Hall Laurel for her book Soundtrack of Our Youth: History of Hair Metal Music, which was recently released and is available in Kindle and paperback formats.

In terms of whether Twisted Sister could be lured into playing another show after their 40 & Fuck It farewell tour a couple of years ago, French replied:

Having said that, I said we would never play again after 1988 and we did so take my comments for what they are worth.

As far as putting on a ‘dream’ show. Well….that’s not how we roll.

Our entire history is built on the premise that we destroy the competition. Why would any band want to be shown up? This predatory mentality started back in the bars where it was ‘kill or be killed’. We had to wipe the floor with all the other bands in order to increase our popularity and, as an incentive, get paid more money.

There is no fraternity, no brotherhood. At least not on the stage, which is our “playing field.”

Yes, we have friends in other bands but when it comes to the show, look out because we are coming to get you.

We come to every show with the purpose of demolishing and demoralizing the competition. This is not a Kumbaya way to engender a ‘family spirit’ but it does lead to a night of great entertainment for the fans which, at the end of the day, is all that really matters.

Seeing us live has been called a “religious experience” by too many journalists (and fans) who witness our power.

You may want to ask “What four bands would you care to destroy a single night?”

The answer to that is found in the heap of reviews that have followed us since we returned in 2003.

Over the 150+ shows that we either headlined or co-headlined, we absolutely demolished the festivals. 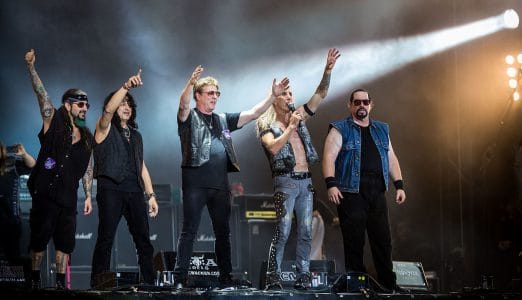 Now I get that some people feel that this kind of hubris is just so much hyperbole and arrogance. I get that. What really shocks me is how uninteresting and predictable most of the headlining bands we played with are live. How they don’t get it.

When we played the Arrow festival in Holland in 2008, I went into the audience to watch the headliner. We, on this bill, were just a special guest and I was looking forward to seeing the headliner as I had not seen them since 1976.

There were two guys standing in front of me who had seen the headliner several times that summer. The conversation between them was eye opening.

One of the guys says “Now the singer is going to look to the right and say blah, blah blah…and, like out of a script, the singer looked to the right and quoted what the guy says. After that song the guy says “Now the singer is going to looked to the left and say”….and that’s exactly what the singer did. So, what does that tell us? It tells us that the band goes through its show verbatim with no spontaneity. No real connection, just going to script. This is what happens and why it’s all so damn boring.

The next day, in the national Dutch press, the show got great reviews but there was only 1 photo (in the center of the double page spread).

The caption read in part: The only band to provide a religious experience and, by far, the only universal response from the crowd was Twisted Sister.

Occasionally I watch a song or two of the competition but only to see what they are doing wrong.

Not one single band we have played with in the last 15 years have made me go …whoa!

Trust me, I wish they did but blowing them way has just been way to easy. How, after all these years, they still don’t understand how to actually make 100,000 people really go crazy. Are we really that good or are most of the bands we play with really the mediocre.

I say this because I just can’t understand why other bands can’t take us out.

It just makes the night better. Reach for the stars and give a great show. Blow us off the stage. Most just are not capable of it and we show them all up over and over.

Bands don’t want to go on after us. We suck up all the oxygen in the room and leave nothing. I can’t tell you how many times when we are not the closer, we are asked to close by the promoter under the guise of some lame excuse as the original closer has to leave early for another show the next day….yawn…

I don’t need to name names. Just look at the bills we are on and you will see 100% “best live band” in the reviews.

This is what we are most proud of. Being the absolute best and having said that, the suggestion you made would never happen!”

Sleaze Roxx can attest to French‘s comments about how great that Twisted Sister are in a live setting from the following retro concert review of a 2006 Twisted Sister concert:

“With more than 3,000 shows under their belt, Twisted Sister quickly proved that there is virtually nothing that can replace experience. The band put on a great performance from start to finish. Lead vocalist Dee Snider easily proved why he is the best frontman in rock ‘n’ roll as he had the crowd, including myself, laughing at times but also seriously pumping our fists and screaming our guts out. Quite simply, Snider is a master at what he does. He knows just what to say to win a crowd over and get people “motivated” to sing out loud and throw their fists into the air. Not that Snider had to do that on this night, as whoever attended Twisted Sister‘s show appeared to be long-time fans who, like me, had to wait a long time to see the band play either for the first time or again after the band broke up back in 1987….

What I remember most vividly about this show was how I was just blown away by the power of the opening riffs for “You Can’t Stop Rock ‘N’ Roll”. I had never felt anything like that for a song up to that point, and have yet to experience that feeling again at a concert. One of my arms quickly went up in the air with my fist pumped for the appropriate sections of the song’s opening riffs — that was hands down the best song of the set for me.”