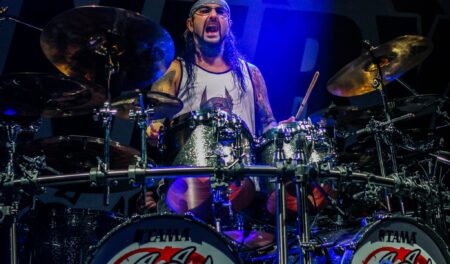 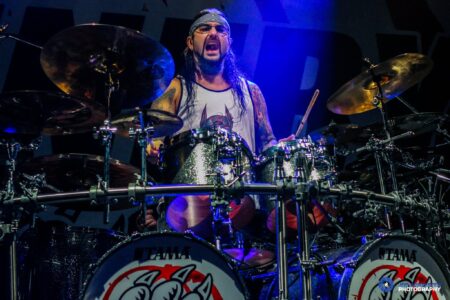 Twisted Sister‘s classic line-up of lead vocalist Dee Snider, guitarists Jay Jay French and Eddie Ojeda, bassist Mark Mendoza, and the late drummer, A.J Pero, are scheduled to be inducted into the 2023 Metal Hall of Fame Charity Gala, which will be held at the Canyon Club in Agoura Hills, California, USA on January 26, 2023. Snider, French, Ojeda and Mendoza along with drummer Mike Portnoy (ex-Dream Theater, The Winery Dogs, Sons of Apollo) are expected to play a few songs together at the induction ceremony. When Pero passed away on March 20, 2015 at the age of 55, Portnoy ended up taking his place in the Twisted Sister line-up.

In terms of how Portnoy ended up replacing Pero in Twisted Sister, French indicated (with slight edits): “Now when A.J. died, for those of you who don’t know, A.J. was in a band called the Adrenaline Mob and that was his side gig when Twisted wasn’t on the road. He was on the road with Adrenaline Mob and he died in the tour bus of Adrenaline Mob in a parking lot in Poughkeepsie, New York. He had a heart attack. A.J. also replaced Mike Portnoy who was in Adrenaline Mob. So A.J. dies and the day after, there was a memorial show in New Jersey. Adrenaline put on the show and I went because they asked me to appear on behalf of Twisted Sister and play a song with Adrenaline Mob. And I’m sitting there and Mike Portnoy was there, and Mike Portnoy and I were in the dressing. We’d never met officially and we’re both crying because A.J. just died 24 hours before.

We’re both like crying you know but anyway, Mike looked at me and says, ‘Man, uh, what are you guys gonna do?’ Because we had a tour lined up and I went, ‘I don’t know.’ I don’t know if we haven’t even discussed it. He said, ‘Well look, I’m not touring this summer and if you need a drummer, call me. I’m available.’ So we attended A.J.‘s wake a couple of days later and we’re all sitting around his father-in-law’s house in Staten Island discussing the future of the band and I went, ‘You know, Mike Portnoy offered his services should we decide to continue.’ Now at that point, the whole European Festival tour was set up that summer so all these promoters are now calling to find out because we’re headlining 15 festivals and we’re telling them, ‘Give us some time because we can’t process. This is too traumatic.’ We were so blown away by Mike‘s offer and we thought about it and said, ‘You know what, we’ll take you up on it.'”

You can read other excerpts from the interview with Jay Jay French at The Metal Voice‘s website and/or listen to the interview below: