Pennsylvania, USA rocker Jay Luke has released a video for his song “Side Effects” from his debut solo album It’s About Time. 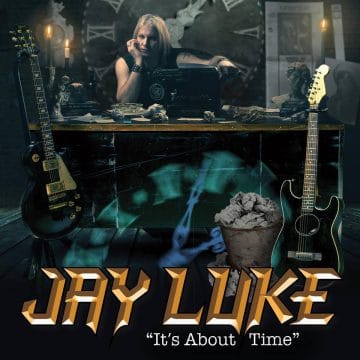 Luke‘s “Biography” on his Facebook page states (with slight edits):

“Jay Luke has been performing and writing music since 2003. Playing in bands such as The MESS, Sorrowsun, and ReachForTheSky, he has honed his craft and paid his dues in the live circuit.

He has performed gigs with Duff McKagan of Guns N’ Roses, W.A.S.P., Metal Church, To/Die/For from Finland, Joey Belladonna of Anthrax, and Richie Ramone of The Ramones.

After much frustration in getting the right line up secured to release an album with his first two bands, he decided to take the studio time he had left to record the songs he wrote to work on his solo career.

“It’s About Time” was recorded from 2016-2017 and the album’s title is quite appropriate considering his disappointments in depending on other musicians to put out an official band release. Jay went into the studio and laid down the rhythm tracks and vocals and called upon his favorite musicians to come in and do guest spots.

Artists on the album include the players Jay has known in the NEPA music scene as well as established rock n’ roll artists such as guitarist Adam Bomb, who has worked with John Paul Jones of Led Zeppelin and Michael Monroe of Hanoi Rocks and also features drummer Carl Canedy of The Rods and Manowar.

The release showcases the variety and influences he has taken on over the years and really make for an exciting listening experience.

You can keep up with Jay on social media to find out when and where he will be performing.”

This is the first official music video from the debut solo album “It’s About Time” by Jay Luke. The song is called Side Effects and was produced by Joe Lof…