In terms of how he’s able to still sing songs as well as back when Tesla first opened for Def Leppard back in the late ’80s, Keith indicated: 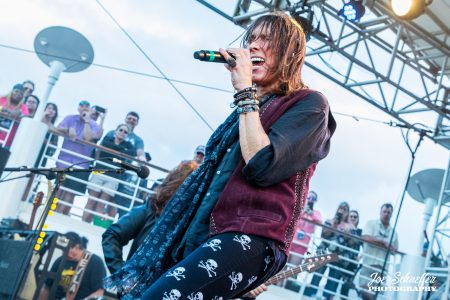 “Well, thanks, Mark. Yeah, some songs I do believe, I know for a fact that we kind of tune some songs down. You can tune the guitar down. So it’s a little easier for me to sing, because some stuff I did 30 years ago, it’s a little hard to recreate it on stage, live, and night after night. But we’ve tuned a few things down. But, really for the most part, just try not to think about it. And we really are up there having a good time. We’re five brothers up there on stage having fun and that’s, I think, the atmosphere that everybody picks up on and it’s really genuine. We genuinely love playing live, performing with one another, and making albums together and we still love making albums. Sometimes bands from our era, they’re just not writing much new material, but we like playing and we love writing songs. So far we’re still keeping that wheel rolling and having fun doing it and enjoying what we’re doing. And so when we get to play it live, that’s what’s coming across. We really do genuinely love doing what we do. And that’s performing live and making records.”

With respect to how the creative process may have changed for Tesla over the years, Keith stated:

“Well, actually, usually for Tesla it always worked out where the guys would write music and then I’d write, just humming a melody to a song, and then we would start piecing songs together. And, when we’d make records, we would go into the studio and almost kind of do a live scratch take of a song, and then work on a particular song until we felt we had it in the can where it was exciting working with Phil Collen with the Shock record that we released last year, which was a great experience because Phil had a whole different approach on how to make a record. And it was fun to go into the studio and say sing. I’d sing the chorus to a particular song and then we’d just switch over and sing the verse to another song

And he helped us co-write that whole record too. Not just produce it, but he helped us co-write it. So we learned a lot of different ways and it was exciting to try it with a whole new approach. But with Tesla, we usually just, the guys will write a bunch of music, and the next you know, whatever we’re all kind of hitting on and we want everybody at the table happy. All five of us, and next thing you know, we get a vibe on the song and we just follow through and write it in that form. But it was fun doing it. As I said, it was a whole new experience doing it with Phil Collen where we kind of bounce around from song to song. And like I said, he helped us co-write it and with all his experience with recording he’s a great producer, great guy, great songwriter. So that was fun and exciting to do Shock in a different format than we’re used to doing with Tesla.”

You can read the rest of the interview with Jeff Keith by media journalist Jeff Keith at Antihero Magazine‘s website.