In an interview with Rockrevolt back in the spring of 2016, Tom Keifer had indicated that Cinderella would not be getting back together until issues lasting decades have been resolved.

Cinderella guitarist Jeff LaBar was recently interviewed on Another FN Podcast With Izzy Presley where he spoke about his drinking issues that affected Cinderella and why the band has not gotten back together.

The following is an excerpt from an article run by Blabbermouth:

“Now, in a brand new interview with “Another FN Podcast With Izzy Presley“, LaBar opened up for the first time about CINDERELLA‘s decision to stop touring, saying that he understands why Tom doesn’t return his calls and admitting that he is “pretty much done playing music.”

Asked what his take is on where CINDERELLA stands in 2016, LaBar said: “Hmmm… I have no idea. I don’t talk to any of them anymore. Or, let’s put it this way: they don’t talk to me.

“We all made a pact a long time ago to not continue CINDERELLA if one of us drops out. And I think [Tom is] gonna stick to that. I don’t talk to him anymore, so I don’t really know for a fact. But we all did make a pact not to do it if it wasn’t the four of us. And it’s not the four of us anymore.

“I can only speculate, but I believe it’s all my fault. It’s no secret that I’ve had a drinking problem. And it showed its ugly face on one of those [cruises that CINDERELLA played]. I guess that’s what caused a rift.

“When I fell out on one of those cruise ships in front of everybody — like, basically O.D.’d — that’s when the band, and mostly Tom, took notice and was, like, ‘What the fuck?’ So they sent me to rehab. I did the rehab, I did extra rehab, and Tom was, basically, my champion. He paid for quite a bit of it, so I did an extra month on Tom‘s dime, and came out a better man. But I only stayed sober for a year. I got off painkillers that I was addicted to because of my hip surgery; I had a hip replacement, and everybody was anxious to give me painkillers, which I needed, but I took it too far, being a partying guy.

“So I got off the painkillers, but a year sober alienated me from everybody around me — everybody I was hanging with, everybody I was working with. Being sober in front of people drinking sucks. On top of the fact that I suffer from anxiety. Part of the reason I drink is so I can walk out of my house and deal with the public — and it’s always been that way. So I went back to drinking, and some people [did not approve of it] and maybe took it personal.”

Asked if he is sober now, LaBar said: “No, I’m not. Which is the problem. Which is probably the problem. Like I said, I can only speculate, because I don’t talk to the other guys anymore. I talk to Fred [Coury, drums] every now and then. Eric [Brittingham, bass] lives twenty minutes from me. We haven’t talked lately, but Eric and I have been the most consistent of all my bandmates throughout the past thirty-two years. It’s just Tom and I that don’t talk anymore. And I can only speculate that he’s very disappointed and doesn’t wanna see me die. He doesn’t wanna witness me dying.” 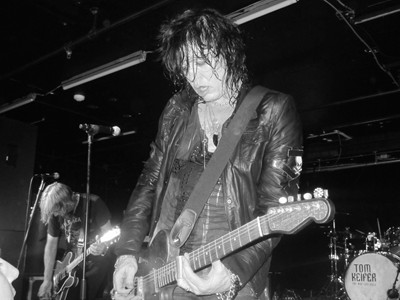 The guitarist, who recently enrolled in the culinary arts associate degree program at The Art Institute Of Tennessee, added: “I drink a few beers. I’m in school all day, so I’m not drinking. I’m being responsible. I’m actually getting straight As in school. But when I come home, I chill out with a couple of beers. I go to bed early. I’m usually in bed by nine or ten. So I’m being responsible.”

According to LaBar, the touring lifestyle “fed [his] appetite for partying… all the way back to the ’80s.” He explained: “I have a history. It’s not just these past issues. I have a history of drinking and cocaine… In the ’80s, it was cocaine abuse. In the ’90s, it was heroin. I went through every cliché phase that a rock star could go through. It just wasn’t highly publicized. I was arrested, I went through rehab, I did all the things MÖTLEY CRÜE did. I just didn’t publicize it. I was MÖTLEY CRÜE and GUNS N’ ROSES all wrapped into one. As a band, we tried to hide our dirty laundry, and most of our dirty laundry was me. We didn’t try to hide it; we just didn’t publicize it. We just didn’t tell people. ‘Oh, yeah, Jeff‘s in rehab. Jeff‘s in jail. Jeff‘s in… whatever.’ We just didn’t publicize it. We actually kept it to ourselves. It was our family. It was our family business, and that’s how we treated it.”

Despite the fact that he hasn’t spoken to Keifer in the last couple of years, LaBar says that he doesn’t hold a grudge against his longtime friend and bandmate. “I understand why he doesn’t return my calls, and I don’t blame him,” he said. “I understand. And hey, you know, he’s been the major talent of CINDERELLA all this time, and he deserves to be solo. Not deserves to be solo, but, you know, it was inevitable for him to go solo. He’s just one of those guys — lead singer, main songwriter. It’s inevitable that he should go solo and basically dump [laughs], dump the dead weight.”…

He continued: “I rode [Tom‘s] coattails for long enough. I mean, the man is the most talented man I’ve ever met, and he has been the biggest influence on me in my career and in my life. So I have no complaints. He should do what he wants. He should tour solo, continue to do that, and all I can do is wish him the utmost success. He deserves more success than what he gained with CINDERELLA.”