Dokken, Super Stroke and Foreigner bassist Jeff Pilson was recently interviewed by Joel Gausten who asked whether Pilson thought that the band had gone as far as it could when it originally broke up [back in 1989]. 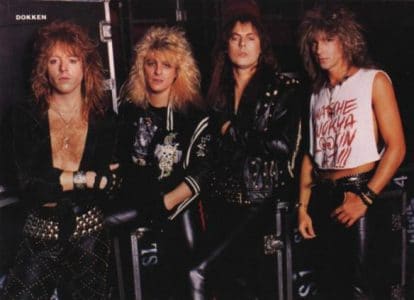 Pilson opined: “Absolutely not! (laughs) We did break up, but it happened as the result of Don leaving. I can remember having many a talk with Don. I would pull out statistics, like, ‘Only 41 albums went Platinum in 1988, and we’re one of them!’ I was really trying to sell the idea of keeping the band together for at least a couple more cycles. Our management was trying to do the same; they were dangling large monetary carrots in front of us. Money was one of the reasons that I thought we should stay together, but I also felt like, ‘No! We haven’t taken this as far as we could.’ In retrospect, having broken up then probably eliminated us from being part of the carnage that Hair Metal received in the early ’90s. (laughs) We were already gone by then. We did have a career after that; we were able to come back a couple times. That may or may not have happened had we continued then. Who knows? But I did not want the band to break up; I did think we had more to do. I thought had we done one more record, we could have really put ourselves in a much, much bigger position – which, again, would have suffered terribly in the ’90s, but maybe we would have had a better springboard to jump off of from there.”

With respect to how the Dokken song “Dream Warriors” appearing on the movie Nightmare On Elm Street impacted the band’s career, Pilson commented: “In a big way, because you’re not the first person to tell me that. There are a lot of people who did get familiar with us through that. Our managers at the time were really great. Cliff Burnstein, one of our managers, was really close friends with Wes Craven, the guy who did the Nightmare series. Those are the two who kind of concocted this idea. Not only was it a great thing to be involved in the movie, but the video that came out afterwards was the first time that a commercially released movie included a music video from the band that did the title song. That got us a lot of exposure. I would say that ‘Dream Warriors’ was a critical song for us as far as introducing us to a lot of people, and it is a very consummate Dokken-sounding song. It sort of established our sound with a lot of people, which was a great thing.”

You can read the rest of the interview with Pilson at Joel Gausten‘s website.