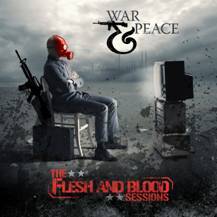 On April 23rd Deadline Records, a division of Cleopatra Records, will release a special edition of ‘The Flesh And Blood Sessions’ from War & Peace. The collection includes an unreleased track and liner notes from Jeff Pilson.

Re-mastered by Wyn Davis (Dokken, Dio), ‘The Flesh And Blood Sessions’ re-issue comes with all new artwork, liner notes by Jeff Pilson, and includes an exclusive bonus track, “Heaven Knows”, featuring guitarist Darren Housholder (Love/Hate), not found on the original 1999 release. Making a guest appearance on “What I Hid Behind” is vocalist Robin McAuley, with whom Jeff was working with in MSG.

Jeff Pilson is a prolific musician, a multi-instrumentalist who has been in internationally recognized bands almost his entire career. As evidenced by the musical fire power in War & Peace, Pilson’s collaborations lead to material that holds up in today’s heavy music environment. “To this day I’m frequently asked about this period of the band and thought that putting out this CD could answer many questions,” said Jeff.

Listen to an MP3 stream of the song “Nailed To The Cross” at soundcloud.com/brosseaupr/nailed-to-the-cross-war-peace.

‘The Flesh And Blood Sessions’ track listing:
Kill For The Love Of God
Snake Eyes
If I Put My Love In You
I Don’t Want To Be Lonely
Nailed To The Cross
Idle Worship
Bringing It On
Raising Cain
What I Hide Behind
Heaven Knows