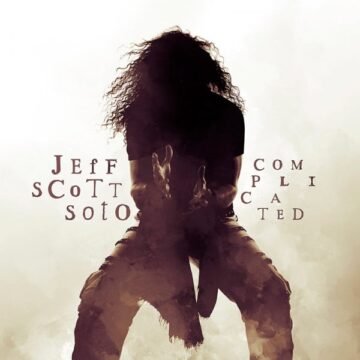 The following message was posted on Frontiers Music Srl‘s Facebook page on March 2, 2022 (with slight edits):

“Frontiers Music Srl is pleased to present “Complicated“, the eighth official studio album from veteran hard rock vocalist Jeff Scott Soto. “Complicated” will be released on May 6, 2022 on CD, Color LP, and Digital formats. Today, fans can get their first taste of new music from the album with the release of the single and video ‘Love Is The Revolution’. Watch the video here:

As with his previous studio album of all new material, “Wide Awake (In My Dreamland)”, Soto teamed up with producer and songwriter Alessandro Del Vecchio (Hardline, Revolution Saints, Edge of Forever) to craft “Complicated”. Arguably the best JSS album since Damage Control, “Complicated” has a Talisman and even a W.E.T. (Jeff‘s band with members of Eclipse and Work of Art) feel to it, but all feels wholly Jeff Scott Soto at the end of the day.”